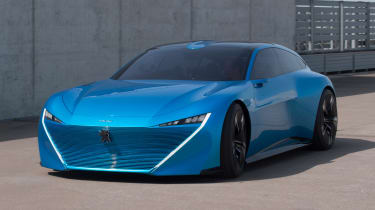 The Peugeot Instinct is a dramatic, exciting and tech-laden preview of the future for a brand that has gone from strength to strength in recent years. Granted, we didn’t learn much about the driving experience on this brief encounter, but if Peugeot can integrate all of the Instinct’s systems and, importantly, retain the unique design and materials, it looks like the brand’s autonomous car of the future could be a seriously desirable one.

Peugeot’s biggest crowd pleaser at this year’s Geneva Motor Show was undoubtedly the Instinct Concept. From a company that nowadays prioritizes building small cars and family SUVs, a sleek ‘shooting brake’ with suicide doors, active aerodynamics and shape-shifting seats was always going to cause a stir.

Unlike most jaw-dropping motor show concepts that have to be manhandled into the public eye by minders, though, the Instinct is actually a functioning vehicle. To get a bit more of an insight, Auto Express was invited for a brief stint behind the wheel (of sorts) on the roof of Peugeot’s Design Centre in Velizy, France.

As well as being tasked with showcasing Peugeot’s styling direction in years to come, the family hatch-sized Instinct is also the French carmaker’s first stab at designing a fully autonomous vehicle. Head of Concept Vehicles, Matthias Hossann, told us this was a “completely different process” for the design team. 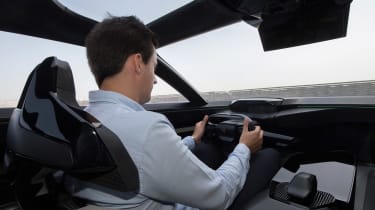 “Most of the time we will design a car with a sleek exterior shape, and then work-out the interior and packaging afterwards. This time, we came up with the interior design first. We wanted to create a living room feeling”.

Producing the ultimate interior for an autonomous vehicle is even more important than it is for today’s cars, Peugeot’s bosses say. The freedom given to the driver by letting them take their hands off the wheel and feet off the pedals also means the cabin will need to be a more interactive, enticing place to while-away the hours.

The Instinct takes elements of Peugeot’s current ‘iCockpit’ cabin architecture and evolves it for the autonomous era, with two distinct setups in Drive and Autonomous mode. Select the latter and the whole cabin transforms: the steering column electrically glides back into the dash, the throttle pedal retracts and those figure hugging seats slide down and recline. Neatly, the upper portion of the seat frame stays where it is so it doesn’t impact on rear legroom. Peugeot has also deliberately avoided offering any sort of swivelling seat as such features are not practically possible on a car that’s no longer than a 308, and lower to the ground than most sports cars. 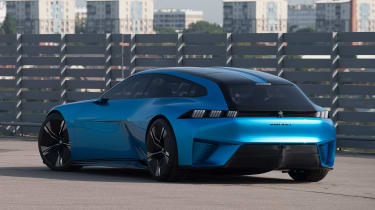 Given the solidity of this concept car’s seat it’s a surprisingly comfortable place to spend time. And while it’s disconcerting not having a wheel to grab hold of, the driver can adjust how the autonomous tech behaves (for example, by overtaking) via the ‘i-Device’ mouse-style central controller.

We were allowed to circle the design centre’s roof at very low speeds with the car in Drive mode, and then in Autonomous mode with the wheel retracted. However, as Peugeot hasn’t yet applied the multitude of sensors and computers required for its promised Level 5 automation, that part was taken care of via a minder and a remote control.

While the show car is in theory powered by a 297bhp plug-in hybrid powertrain, the Instinct here was only able to glide silently on electric power. Our short stint certainly isn’t enough to give a dynamic impression, then, but it did allow us to appreciate how the interior would operate in a real-world situation.

Two things are unique to the Instinct experience and make it stand out from other driverless concepts – the tech on display and the materials used. Peugeot is the first carmaker to integrate Samsung’s Artik Cloud ‘Internet of Things’ platform into one of its concepts. Through various touchscreen displays for both drive and passenger, it can monitor the health of the occupants and automatically set the car up to suit their mood, synchronise the driver’s diary with the navigation system, and even communicate with your home.  There’s also a ‘chatbot’, a personal assistant that can be told to do things such as book cinema tickets or suggest new destinations that the driver may be interested in.

It all sounds like a bit of a stark, cold tech overload but Peugeot has also been inventive with the cabin materials used to create a more homely environment. The seats of this concept are trimmed in the same breathable fabric that you’d find in a training shoe, with 3D printed foam inserts higher up the frame. Traditional thick knitted carpets also feature, while the most surprising material in use is concrete: a thin layer is applied to the lower doors and floor, with a more appealing texture than you might expect. It certainly seems like the French brand understands that buyers want future vehicles to be high-tech, but also welcoming.