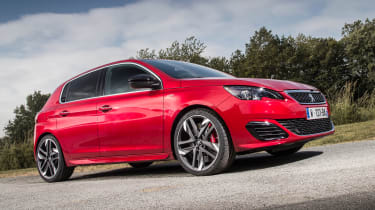 2015 was already shaping up to be a stellar year for new hot hatches, and now Peugeot has waded in with a full-fat performance version of the 308. Badged ‘GTi’, not ‘R’ (as hinted at by the 2013 308 R concept), it’s available with a choice of two power outputs – 247bhp and 266bhp – both with chassis tuned by its motorsport arm, Peugeot Sport.

Positioned above the warm 308 GT, but directly opposite the 247bhp Ford Focus ST and 276bhp SEAT Leon Cupra, the 308 GTI follows the RCZ-R and 208 GTI 30th Anniversary Edition as the third model to be tweaked by Peugeot Sport, and it’s a typically thorough job. Unlike its rivals – most of which use 2.0-litre turbocharged engines – the 308 employs the same frenetic 1.6 THP unit as the RCZ-R – with big benefits for fuel economy. 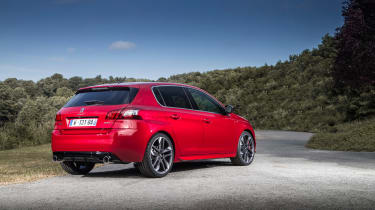 The main difference between the two variants is the addition of a Torsen front differential, 19-inch ‘Carbone’ wheels wrapped in Michelin Super Sport tyres and bigger 380mm front brakes with Peugeot Sport branding on the calipers, all fitted as standard to the more power model. However, both get a heavily reworked suspension system that drops the whole car 11mm closer to the ground. 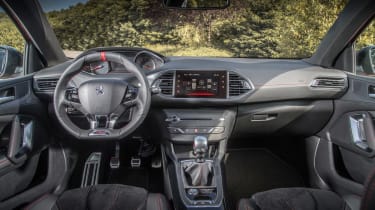 Wider front and rear tracks, increased camber on the front wheels and much stiffer bushing for the rear wishbones, should help to boost grip and sharpen the 308’s reactions. Compared to the 308 GT, the springs are 60 per cent stiffer at the front and 100 per cent stiffer at the rear, although the front anti roll bar is slightly thinner, to help boost traction. Despite the revised setup Peugeot insists it’s a car made to drive fast on country roads rather than a track.

There are no wings or slashes in the bodywork like the Honda Civic Type R, so you’ll have to look closely to spot the styling changes over the GT. At the front full LED headlights sit either side of the grille, filled with a gloss black 3D mesh. A deeper front bumper is added, with winglets on its leading edges, along with chunkier side skirts and a compact rear diffuser with two round exhaust pipes either side.

If you’re after something a little more head-turning, then a Coupe Franche model is available with a red and black two-tone paint job. Similar to the 208 GTI 30th Anniversary Edition’s colour scheme, although with the colours in reverse, it’s a £1,300 option. 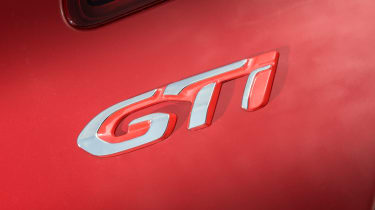 On the inside, leather and Alcantara sports seats are the major change, along with a smattering of GTI badges. If you want to up the excitement, a Driver Sport Pack adds a Sport button to the centre console. Press it and the previously white dials glow red, throttle response is sharpened and extra (synthetic) exhaust noise is pumped through the speakers.

The 308 GTI will make its dynamic debut at the Goodwood Festival of Speed this week, before going on sale officially in October. Exact prices are yet to be confirmed, but expected to pay from around £26,500 for the 247bhp model and £28,250 for the higher-spec car.

Now read more about our favourite hot hatches of 2015...