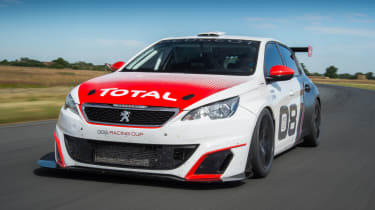 Peugeot Sport’s latest customer racing car is spectacularly capable. With over 300bhp, slick tyres and real downforce, it corners hard enough to distort your vision. Pro racers will find it rewarding, while amateurs will enjoy learning to reach the limit of its abilities.

For those who think the Peugeot 308 GTi doesn’t quite cut it, the company has another more focused alternative in its range – the track-only 308 Racing Cup.

A successor to the RCZ Racing Cup, which has served as Peugeot Sport’s customer motorsport offering for five years, the 308 is a quicker and louder upgrade, and we've been granted exclusive access.

“We start with the standard 308 GTi engine,” says Laurent Guyot, the man in charge of Peugeot Sport’s customer racing programmes, “then we fit a massive turbo.” 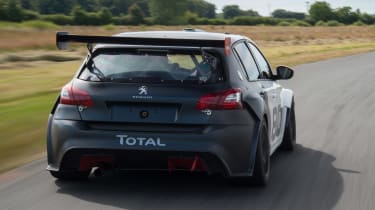 The engine internals are unchanged to reduce costs, but the 1.6-litre is still good for 304bhp and 400Nm of torque – up nearly 50bhp and 100Nm on the RCZ Racing Cup. The transmission is a development of the six-speed Sadev sequential in the RCZ, with steering wheel paddles. A limited-slip diff manages torque between the front wheels.

Elsewhere, all the usual motorsport upgrades are present, including AP Racing brakes and fully adjustable suspension, a weld-in roll cage, wider tracks with swollen wheelarches and slick Michelin tyres. The prominent front splitter and jutting rear wing generate as much as 160kg of downforce, while the flat underfloor helps to reduce drag. Total dry weight is 1,100kg.

Those modifications have given the 308 Racing Cup extraordinary cornering ability. On a warm circuit with sticky slick tyres, there is masses of grip, plus strong traction, even away from incredibly tight first-gear corners. 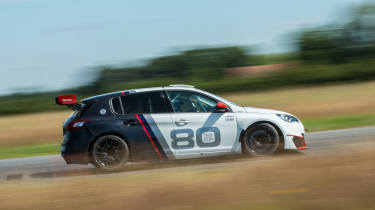 And while there’s no ABS, the brakes have enormous bite, and never lock up no matter how hard you stamp on the pedal. As it’s a racing sequential gearbox, you only need to use the clutch when pulling away or coming to a rest, so you can left-foot brake for even finer control over the car.

The 308 Racing Cup is a supremely capable – if physical – touring car, and extracting its full performance requires huge talent. It’s accessible enough, though, that your average hobbyist racer will have just as much fun. As well as running in a single-make series from 2017 onwards, the 308 Racing Cup will be eligible for various global motorsport series, including the international TCR touring car category, the 24H Series and the Nürburgring-based VLN championship.