The Peugeot 5008 hasn't featured in our Driver Power customer satisfaction surveys, but the closely related 3008 has, and it's been a regular top 10 finisher in the new car section of the survey. In fact, the 3008 came 2nd in our 2020 poll. High scores across the board help it to perform well, while owner praise for the car's ride and handling, safety features and infotainment will apply equally to the 5008, while the 3008's already high scores for interior comfort and practicality will only be built upon by the seven seater.

Peugeot as a marque does reasonably well in the manufacturer ranking, usually knocking on the door of the top 10 and regularly beating manufacturers such as BMW, Audi and Mercedes, while also finishing ahead of sister brand Citroen. Owners like the comfort the company's cars offer, as well as the running costs, including the price of servicing, while a fewer than average number of owners have reported faults with their cars.

As family transport the Peugeot will be reassuringly safe, offering autonomous braking and lane-departure warning as standard across the range, while Allure models and above get blind spot detection as well as lane-keep and high-beam assist.

There isn’t really any safety tech to add because most of this is included as standard. And just to reiterate the close relationship between the 3008 and 5008, the 3008's five-star Euro NCAP rating that it achieved in 2016 applies equally to the seven-seater, as it has the same safety tech on board. 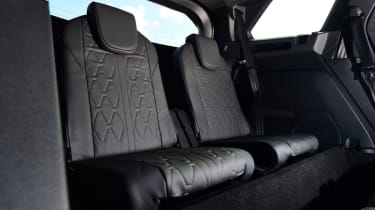 In the UK, the 5008 has the same three-year warranty as is available on all new Peugeots – with the first two years covered by Peugeot and the final year covered by the company's dealers. It’s pretty much an industry-standard package and is only really beaten by Hyundai and Toyota’s five-year warranties and Kia’s seven-year one.