Diesel hybrid tops the Peugeot 508 range, but comes at a price. Is it worth it? 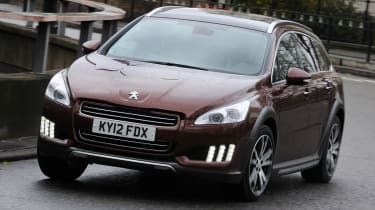 The 508 RXH seems quite promising, particularly given the performance and fuel economy on offer. Yet you find yourself driving around the hybrid system’s quirks. Unless you need four-wheel drive and 200bhp, a normal 508 SW with the 1.6-litre e-HDi engine is nearly as clean, smoother to drive and – even in the most expensive spec – £8k cheaper.

Audi has its rugged Allroad models and now Peugeot has the 508 RXH. It’s a 508 SW with a raised ride height and off-road bodykit, but it’s also a hybrid – a four-wheel-drive, diesel-electric hybrid, to be precise.
It has the same 2.0-litre diesel engine and electric motor as the 3008 HYbrid4 and Citroen DS5, producing 200bhp. This takes the RXH from 0-62mph in 9.5 seconds, yet claims 68.9mpg and 107g/km CO2 – although we only managed 44mpg on our town and motorway drive.
Videos: Watch footage of the 508 RXH in action
[[{"type":"media","view_mode":"content_narrow","fid":"69358","attributes":{"alt":"","class":"media-image"}}]]
When you first hit the road, you’ll find the RXH pulls away silently and smoothly under electric power, so it’s perfect for low-speed city driving. Things aren’t this smooth all the time, though: floor the throttle regularly, and there’s a pause before the engine kicks in, the gearbox selects a gear and the computers shuffle power around before it’s actually delivered to the road.

This leads to worrying moments where you pull out of a junction and feel temporarily stranded in the path of oncoming traffic. For a smoother drive, Sport mode keeps the engine and electric motor working together all the time and speeds up gearshifts. Matching the claimed economy in this mode is even harder.
Another disadvantage of the diesel-electric set-up is that it encroaches on boot space. The standard car has 660 litres of luggage room, but the hybrid drivetrain’s batteries reduce that to 423 litres in the RXH.
The remainder of the driving experience is better, with quick, direct steering and well judged suspension. Considering the firm and crashy set-up in the 3008 HYbrid4, we were worried about the RXH’s ride comfort, but it does a good job of soaking up rough roads while resisting body roll fairly well in corners.
Peugeot sees the RXH as the 508 flagship, so it only comes in one spec, with cruise and climate control, half-leather trim, 18-inch alloy wheels, sat-nav and parking sensors. The price is worthy of a flagship car – the £33,695 figure sets it against some impressive premium estates. None is as clean or cheap to run as the Peugeot, but plenty are better to drive.
Share this on TwitterShare this on FacebookEmail