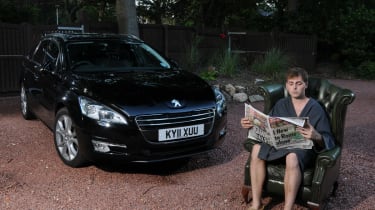 There are few better ways to unwind at the end of a long day than by climbing behind the wheel of our Peugeot 508 SW. Thanks to its comfortable seats, hushed cabin and supple ride driving the big estate is like settling down into my favourite armchair for the evening.

The 508’s calming effects come as a welcome relief after my two previous runarounds: the racy Renault Megane Sport Tourer and stiffly suspended Skoda Yeti. Both cars were great to drive, but neither left me as refreshed as the Peugeot after my 100-mile commute from Bournemouth in Dorset to our central London offices.

Yet it’s not just the 508’s ability to waft effortlessly down the motorway that’s helping lower my stress levels. For starters, the vast 512-litre boot swallows all of my camera equipment, tripods and car cleaning gear with room to spare – unlike some other cars, where my kit often spills on to the rear seat. This means that with the retractable load cover in place I can leave the Peugeot safe in the knowledge that my belongings are protected from prying eyes.

I’m also enjoying the 140bhp 2.0-litre diesel engine’s effortless performance. In terms of standing start acceleration the 508 is merely average, but its in-gear pace is much stronger, allowing the car to breeze past slower traffic. Better still, despite its considerable size, the SW has returned a respectable 40.1mpg at the pumps. And while the major controls aren’t exactly brimming with feedback, there’s plenty of poise and grip through corners.

Sadly, just as I’m really getting to know the Peugeot, it’s set to leave our fleet. In its 12 months at Auto Express, the car has impressed as a stylish, spacious, refined and family friendly estate. Yet it’s not been without fault.

Worst of all have been the numerous electrical niggles. In the hands of previous keeper Graham Hope, the 508 struggled to start on a number of occasions, and often couldn’t detect the keyless ignition fob, even when it was in the cabin. It also went through a phase of refusing to lock when you hit the button on the keyfob. Most obvious of all, though, was the digital readout for the time and date, which kept reverting to 2007.

Yet despite these faults, the Peugeot never left us stranded at the side of the road. In fact, if it wasn’t for the electrical glitches it would easily stand comparison to more upmarket cars for quality. The brand has worked hard to banish its reputation for flaky build, and overall the SW feels solidly put together, while the cabin is packed with soft-touch materials and classy design details.

If the financial worries get too much, I can always calm myself down by taking a drive in the Peugeot. In fact, I’d better do it now before I wave goodbye to the car for the final time.

"The 508 is handsome, comfortable and spacious, but lacks the magic spark that made previous big Peugeots as good to drive as they were to look at."Owen Mildenhall, Senior road tester

“With a 508, if it can go wrong, it will go wrong. The last dependable big car produced by Peugeot was the 406 – and that was built in the UK.”muffindell, via www.autoexpress.co.uk