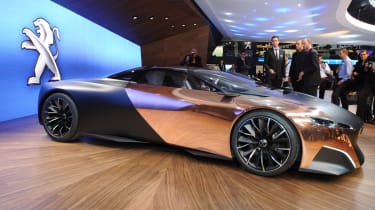 It’s designed to showcase the next generation of the company’s design language, and evolves the look of the 208. It’s more angular and has a narrower and wider grille.

The double-bubble roof is a feature of the RCZ and the rear lights are made up of three narrow lines designed to look like a claw mark.

A Peugeot spokesman told us that the Onyx “hints at the styling of models that will be around in four or five years”. It essentially performs the same function as the 907 concept of 2003, which previewed the rounded, wide-mouth styling of Peugeot’s 207 and 308.

Underneath the Onyx’s bodywork is the 3.7-litre V8 engine and electric motor from the 908 Hybrid4 Le Mans car, which was due to compete at the 24-hour race this year before Peugeot pulled out. The platform underpinning the concept has been developed from scratch, though.

The Onyx has a carbon-fibre body and weighs in at 1,100kg, meaning it should be able to accelerate from 0-62mph in under three seconds. A flat carbon-fibre floor that creates downforce – and therefore grip – without the need for large spoilers is designed to enhance the car’s handling ability.

Materials that could be used in the future are also showcased in the Onyx. Most of the interior, including the centre console, is made from recycled newspaper. From a distance it looks like grained wood, but up close you can see ink and snippets of text.

The seats and headlining are made from felt which is developed from boiling wool, and is fully recyclable.