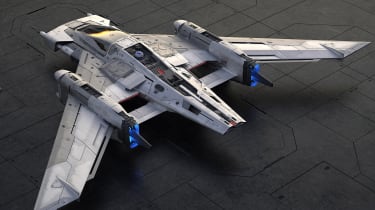 Porsche and Lucasfilm have created a concept Starship for Star Wars Episode VIII: The Rise of Skywalker, called the Tri-Wing S-91x Pegasus Starfighter. It’s due to be unveiled at the film’s world premiere in Los Angeles on 16 December 2019.

Michael Maur, Porsche’s Vice President for Styling, says the Tri-Wing concept blends the design elements of the fictional Star Wars universe with those of current, production model Porsches. He said: “The basic shape of the cabin, which tapers towards the rear, and a highly distinctive topography from the cockpit fly line to the turbines establish visual parallels with the iconic design of the 911 and the Taycan.”

Porsche implemented its four-point day-time running light design on the fictional spaceship’s nose cone, while the high-mounted intakes are reminiscent of the inlets found on the current Boxster’s flanks. The Pegasus Starfighter’s rear louvres and integrated high-level brake light were inspired by the current-generation 911, while the rear aerofoil sports the brand’s trademark full-width light-bar.

The cockpit of the Tri-Wing S-91x Pegasus Starfighter is also inspired by Porsche’s design criteria. The instruments use adapted versions of the German brand’s graphics, while the low seating position and body-hugging seats are reminiscent of the Porsche 918 Spyder. 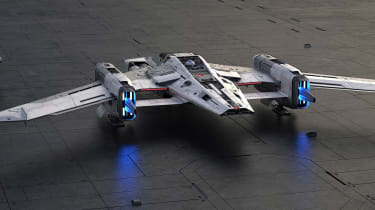 The scale Starfighter model will appear alongside the Porsche Taycan at the LA premiere of Star Wars Episode VIII. Kjell Gruner, Porsche’s Head of Marketing, said: “Our collaborative project with Star Wars goes perfectly with the launch of the Taycan. The design teams have brought the differing worlds of Porsche and Star Wars together to make a very special gift for the fans of the two brands.”

What do you make of Porsche’s Starfighter concept? Let us know in the comments section below…