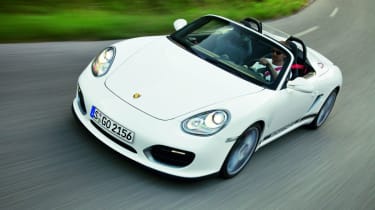 Who says the best ideas have to be new? The engineering and design philosophy that underpins the new Porsche Boxster Spyder might be more than 50 years old, but its as relevant today as it has ever been and has helped create a open topped roadster that few other cars can rival for driving thrills and ride and handling. Yes, the suspension is firm, and no, the roof does not offer all weather protection of the standard car.But is this the greatest driver's car Porsche currently build? If the answer is based on budget, then it's a resounding yes! Pound for pound, in every sense, no other model comes close.

It's the stripped out, lightweight Boxster that's hoping to revive the glory days of Porsche's legendary 550 Spyder.

Fifty-six years after that car went on sale, we got behind the wheel of the Boxster Spyder, but is it as exciting as Porsche make out?

Weighing in at only 1,275kg this is by far the lightest Porsche in the current line-up. During its crash diet the Spyder has lost any unnecessary dash trim, gained carbon-fibre bucket items in place of the usual, heavy seats and now rides on a unique set of lightweight 19-inch alloys.

In the flesh, an updated exterior reveals that the Spyder is more than the average Boxster. At 25mm lower than the standard model and with two humps mounted behind the seats the new car takes on a stance more recognisable as the Carrera GT supercar than an entry-level sports car.

Despite all the styling tweaks, this isn't a case of all show and no go. Porsche's engineers have added a lower and wider suspension set-up, which offers a lower centre of gravity and firmer ride over the Boxster S. A new limited slip-diff and stiffer anti-roll bars ensure that cornering is as composed as possible.

On the road, all of Porsche's hard work reveals itself. An impressive ride coupled with the low kerbweight and responsive steering means the Spyder is one of the most driver-focused Porsche's ever created.

Comparisons with standard Boxster models don't do the huge step forward this model has made any justice. This machines closest rival is the 911 GT3, considered the ultimate drivers Porsche.

In this week's mag we drive the new Boxster side by side with the car that started it all, the 550 Spyder. So pick up a copy to see how these two cars, united in their aims but divided by 56 years of engineering, match-up in an exclusive head to head.