We take to UK roads in the brilliant Porsche Boxster Spyder, which has a very good go at justifying the £60k price tag 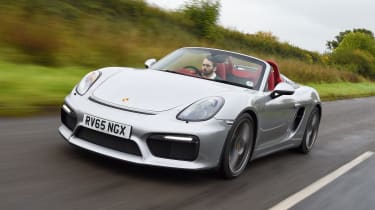 SIMPLY put, the Boxster Spyder is the ultimate version of one of the most intoxicating sports cars you can buy. Crucially, the Boxster’s accessible performance remains; despite being fitted with the 371bhp 3.8-litre engine from the 911 Carrera S. Its abilities are reflected in its price tag, but if it follows the path laid by its predecessor, which is appreciating in value, the Boxster Spyder will not only be a sound investment but a future classic, too

Over £60,000 for a Porsche Boxster seems an extravagant sum to fork out on a variant of Porsche’s entry-level model. After all you can pick up the already brilliant standard version for £37,000. But what we have here is no ordinary Boxster – far from it. This is the new Boxster Spyder and we’ve finally gotten our hands on it in the UK. So what makes the Spyder so special? Well, behind the driver sits the same 3.8-litre flat-six engine from the new hardcore Cayman GT4. Here it’s 10bhp down on power developing 371bhp, but it’s still a substantial 46bhp more than you get in the Boxster GTS, which makes do with the 3.4-litre engine. That makes the Spyder the most power Boxster ever produced.

What further separates the Spyder from the rest of the Boxster lineup is the roof. Like its predecessor, it’s a folding fabric arrangement to help shed weight – saving 11kg – but here it no longer looks like a club scout’s poorly constructed tent. Its sleeker shape clings to the Boxster in all the right places, flaunting the car’s curves. 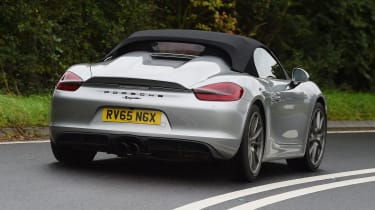 Removing it still requires some manual labour, though. A button on the centre console releases the roof latch and pops open the boot, then you simply unclip the catches at the rear and fold it behind the cabin into a compartment and close the boot. It’s a far less complex process than before and a refreshing change from the electric, origami metalwork we’ve become accustomed to. And once it’s stowed, there are two reasons you won’t want to put it back up. Firstly, with the roof down, the Spyder could quite possibly be the prettiest car Porsche currently sells, with a whiff of 918 about its stance. Secondly, once you sink into the slim, carbon bucket seats, wrap your hands around the Alcantara steering wheel and bring the engine to life there’s no barrier between you and the guttural howl of the 3.8-litre flat-six. Dip the clutch – a six-speed manual gearbox is the only transmission option – punch the stubby gearstick into first and you’re off. Keep it pinned and 0-62mph will be done in 4.5 seconds and if the law allows, 180mph flat out – roof up or down. 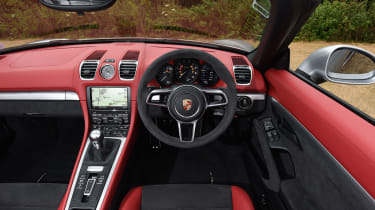 It’s stunningly fast and the razor sharp throttle response means there’s instant shove in reserve. You have to hang on until 6,700rpm before you get all 371bhp which, because of the long gearing, means you’ll be spending most of you’re time in second and third if you want to keep hold of your license.    But what impresses more than the Spyder’s outright pace is just how responsive and tactile it feels above any other Boxster. The steering is marginally quicker than the standard model and responds to the minutest of inputs. And as for the gearchange, well it doesn’t get much better – the lever is stubby and the change short and firm. Its setup is designed for those who prioritise driving above anything else, and that’s shown in the standard specification Porsche sells the car. Everything centres around saving weight. The door handles have been replaced with fabric pulls, while the radio and air con have also been sacrificed to cut the kilos – you can, however, spec both as a no cost option, which adds a rather indecipherable 15kg to the kerbweight. 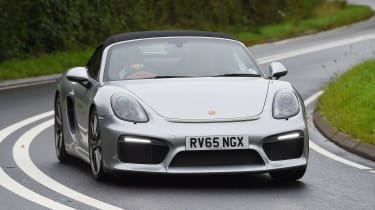 Porsche’s Sports Chrono pack also comes as standard, chopping 20mm from the ride height so there’s a slight firmness to the ride but the damping is supple and effectively soaks up road imperfections. The Spyder doesn’t benefit from the same suspension setup as the Cayman GT4, instead using the passive sports suspension which is an option on the Boxster GTS.   But the Spyder is far more than a Boxster with a fancy roof and all the trimmings. It’s been engineered and honed to a level far beyond any other version in the lineup, but better still, unlike the Cayman GT4, the Spyder isn’t limited by numbers. So if you really want one, you can have one.