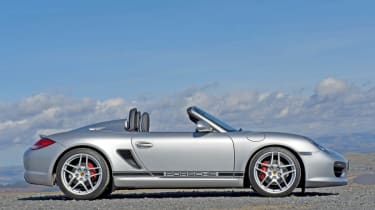 It’s great to see Porsche offering more focused drivers’ cars such as the Spyder. On the right road it doesn’t disappoint, proving quicker and more agile than the regular Boxster S. Sadly, the basic roof means this car will be far from ideal on a long, wet, weekday commute. Most buyers are likely to be more than happy with the standard model – although for those who are prepared to compromise in the pursuit of driving thrills and exclusivity, the Spyder comes highly recommended.

The most exciting Porsche Boxster ever has hit the UK – and Auto Express has driven it first!

This is the new Spyder version of the firm’s two-seater roadster. And as we reported after our first drive in California (Issue 1,093), it has more power shifting less weight – and is a real riot.

Porsche has uprated the 3.4-litre direct-injection flat-six to 320bhp (that’s 10bhp more than in the regular Boxster S) by remapping the ECU. But the most effort has been expended on shedding kilograms. Ditching the air-con and stereo has slashed the kerbweight by 15kg, while carbon fibre-backed sports seats replace the standard items to save a further 12kg.

Aluminium doors usually found on the 911 GT3 shed another 15kg, and a set of new lightweight 19-inch wheels is also fitted, shaving a further 2kg. Finally, by removing items in the cabin – like the cup-holders and door cards, and replacing the door handles with red fabric pulls – Porsche has saved another 15kg.

The biggest weight reduction has been brought about by the fitting of the new roof – which is also the car’s most striking and controversial feature. Porsche admits it offers less weather protection, and it’s not operated electrically, as on the regular car.

The two-part arrangement comprises a weather shield behind the occupants’ heads and a ‘cap’ that stretches over the top, attached via two securing rings set into the rear bodywork. This saves a further 21kg – and overall, the Spyder is 80kg lighter than a Boxster S, at 1,275kg.

With lowered, firmer and wider suspension, the model makes the most of its new-found power and agility to provide lots of thrills. The Boxster S is a very good driver’s car, and the differences are subtle, but the Spyder is that bit keener to change direction and respond to the throttle.

A limited-slip differential is also standard, although we’d avoid extras such as the PDK twin-clutch box and thicker padded seats if you want to retain the Spyder’s character.

The power-to-weight ratio is close to that of a 911 Carrera S, so this is a fast car that sounds incredible, especially with the optional sports exhaust. Porsche claims 0-62mph in 5.1 seconds, or quicker still with the PDK. But if the top is in place, owners should not exceed 124mph on track days.

So what of that roof? It looks complex, and fixing it in position takes a good two minutes even for experienced hands. Sadly, it’s fairly crude by most standards, with basic sealing on its sides. That means lots of wind noise at high speed, and even the odd rain droplet getting into the cabin.

This is a shame, as it makes the Spyder virtually impossible to use as an everyday car – Porsche calls it a Caterham Seven and Lotus Elise rival. But that means you don’t have such opportunity to enjoy this hugely rewarding car, especially in the UK climate.

So the £3,879 premium over a Boxster S is difficult to justify – although on the right road and in the right weather, the Spyder is real fun.

Rival: TT RS Roadster With a storming five-cylinder turbocharged powerplant, the hottest TT is extremely fast. But it simply can’t match the sheer involvement of the new Boxster Spyder. Then again, the Audi doesn’t demand the same compromises, as it has brilliant electric folding fabric roof.