We hit the road first in stunning new stripped-out Boxster Spyder – and rate it against its classic fifties ancestor, the RS550 Spyder. 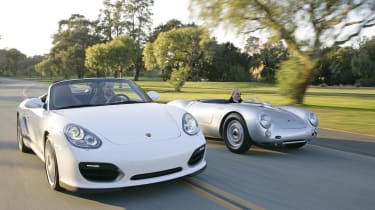 Who says the best ideas have to be new? The engineering and design philosophy that underpins the new Porsche Boxster Spyder is more than 50 years old. It’s as relevant today as it has ever been – and it’s helped to create an open-topped roadster few models can rival for driving thrills, ride or handling. Is this the greatest driver’s car in production? If the answer is based on budget, then it’s a resounding yes. Pound for pound, in every sense, nothing comes close.

It’s the back-to-basics Porsche that the firm says has been 56 years in the making. The new Boxster Spyder is inspired by the legendary 1953 RS550, and built to match that model’s strict principles of light weight and driver focus. According to bosses, this is Porsche at its best. But is it really the most exciting open-topped car in the world? We brought the newcomer head-to-head with the Fifties original to find out.

Porsche wastes no time in pointing to the pared-down specification as proof that the Boxster Spyder will offer the ultimate in driver thrills. It’s the third member of the Boxster family, joining the standard roadster and the tin-top Cayman. To ensure it stands out from both, the Spyder gets a major makeover.

For starters, it sits 25mm lower than the Boxster. Plus, the side windows are lower, and there’s a new windscreen surround and an elongated tail. Two striking domes on the rear lid stretch back from the driver-focused cabin. The interior has been stripped of all non-essentials – even the door handles are lightweight fabric straps.

Figure-hugging seats and new-look, 19-inch alloy wheels also help to save weight. The doors are made of aluminium, as is the sculpted engine cover. As a result, the Spyder tips the scales at only 1,275kg – so it’s by far the lightest model in Porsche’s line-up.

What’s more, the alterations give the newcomer a sleek silhouette which is more reminiscent of a Carrera GT than an entry-level sports car.

As engineers took weight from the body and cabin, they added to the suspension. The new spring and damper set-up ensures the model is lower and wider than a Boxster S, which provides a lower centre of gravity and a firmer ride.

A fresh limited-slip differential has been fitted at the rear, too, while stiffer anti-roll bars keep the body under control on demanding roads.

Finally, the car wears special low-profile tyres. As they are designed to run at very low pressures, Porsche can stiffen the suspension further without ruining the ride. On the road, the car feels every bit as focused as its specification suggests. Comparisons with standard Boxsters simply don’t do justice to the huge step forward this model takes.

Its closest rival is the 911 GT3 – considered by many to be the ultimate driver’s Porsche. Key to the experience are the Spyder’s lightning reflexes, courtesy of that low kerbweight and ultra-direct steering. With only two-and-a-half turns lock-to-lock, the variable rack-and-pinion set-up becomes more direct the harder you turn it.

However, what impresses most is the way in which the Spyder rides – and how masterfully it deals with tricky mid-corner bumps. This Boxster is bristling with advanced safety systems, too. For a start, the Porsche Ceramic Composite Brakes (PCCB) fitted to our car offer huge stopping power.

The latest-generation Porsche Stability Management (PSM) package, included as standard, also provides a high degree of active safety. PSM comes with a range of features such as ABS, Anti-Slip Control, Engine Drag Force Control and an Automatic Brake Differential, as well as Brake Pre-Filling and Brake Assistant functions. To enable agile driving through tight bends, the PSM system cuts in late when the car is travelling below 50mph.

Rival: Audi TT RS it’s powerful and extremely fast, but the TT RS can’t match the Boxster Spyder’s sharp reflexes and delicate controls. And while the styling turns heads, the Audi is brash where the Porsche is more subtle.