We’ve driven a prototype version of the forthcoming Porsche Cayenne PHEV. Could it soon be our new top SUV pick? 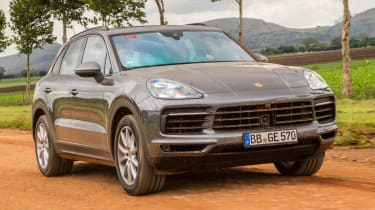 We loved the old Porsche Cayenne Diesel. However, the main reasons why that car remained our pick of the range, even in the later stages of its life, were its prodigious torque output and effortless performance. The forthcoming Cayenne plug-in hybrid delivers the same sensation with a similarly sporty drive as well as rock-bottom running costs and a usable EV range. If all that appeals, it could be well worth the wait.

Diesel? Don’t ask Stefan Fegg about diesel. Because if there is one word the Porsche engineer doesn’t want to hear any more, then that is it. But Fegg has been working hard to side-step the issue, and the outcome of his efforts will be in UK dealers very soon. Despite the fact it hasn’t been officially announced or unveiled, we’ve already been given the chance to try a prototype version of the Porsche’s forthcoming plug-in Cayenne SUV, ahead of its global launch later this year.

For the Porsche Cayenne PHEV, bosses have matched the base Cayenne’s 335bhp turbo V6 with a 100kW electric motor and 14kWh battery. Porsche refuses to reveal exact numbers, but the set-up is likely to follow the Panamera 4 E-Hybrid’s configuration quite closely, offering similar performance and emissions, as well as a usable electric range of “close to 50km” (30 miles) on a single charge.

“But it’s not only about emissions”, says Fegg. “It’s also about emotions” – and a first drive with the near-production ready 4x4 proves the project leader is right. 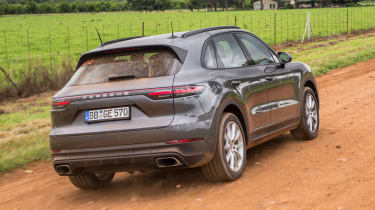 The Cayenne PHEV now has serious punch when you floor the accelerator. In the previous generation car, it often felt as if the engine and electric motor were conspiring against one another, but now they work together to get the two-tonne giant going faster than you might expect.

“It’s the same software that we used in the 918 Spyder”, Fegg explains, as he speaks about the new-found alliance between the two power sources.

Not only can you feel the extra power and enjoy it even more, but the new rear-wheel steering system lets you forget about the additional 300kg that comes as a result of the PHEV’s more complex electric powertrain technology. You can hear it, too, as the sports exhaust system gives the hybrid a deeper voice.

Just like the latest plug-in Panamera, the Cayenne E-Hybrid comes with different drive modes, albeit with subtle improvements for the SUV. When driven as a pure EV, the Cayenne can maintain speeds of up to 84mph, while the Sport setting ensures it almost matches the performance of the petrol-only Cayenne S. In this setting, the engine works to top up the batteries, too.

For Fegg, the hybrid is the ideal solution to the demise of diesel. It offers all the punch and performance of a turbocharged petrol engine, alongside emissions low enough to give owners a chance of swerving any future tax hikes or city centre driving restrictions. It can be scaled up for use with the more powerful V8 engine (as in the Panamera Turbo S E-Hybrid), or down to work in tandem with a four-cylinder, as well. 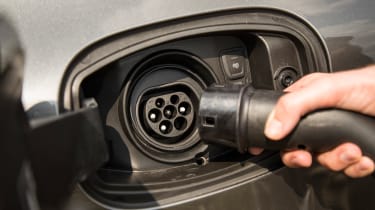 Porsche hasn’t turned its back on diesel completely, though. Fegg tells us: “I’m not sure when – or in what configuration – but yes, we will bring back that technology for the Cayenne.“ It seems Porsche customers will need little convincing in the transition from diesel to electric, however, as recent sales figures show hybrid now accounts for 50 per cent of all Panamera orders.