The mighty Porsche Cayenne Turbo S has gained yet more potency from its twin-turbo V8. Yikes! 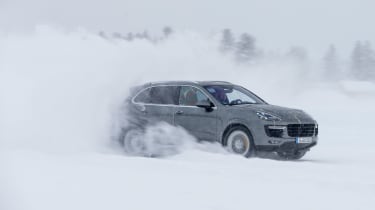 Until the Bentley Bentayga arrives later this year, the Turbo S is the ultimate SUV. With performance to shame most sports cars, the way in which the Cayenne belies its bulk is truly astonishing. Yes, it’s expensive, but for those in the market for a 562bhp super-SUV, its price is unlikely to matter.

Few people can justify a 562bhp V8 super-SUV, but in case you can, here’s the new range-topping Porsche Cayenne Turbo S. With an extra 20bhp and 50Nm more torque than its predecessor, this 2.3-tonne 4x4 can sprint from 0-62mph in 4.1 seconds – faster than the Cayman GT4.

It belies its size, too. Porsche’s PDCC active chassis control does a frankly mind-blowing job of keeping the car in check, with little or no body roll even at very high speed. Clever torque vectoring works in conjunction with the four-wheel-drive system to allow breathtaking cornering speeds, while switching off the stability control entices ludicrous amounts of slip from the back wheels. 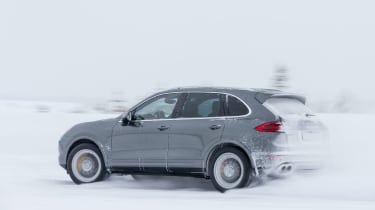 On ice even a family hatchback can be made to feel like a sports car, but we also tested the Turbo S on some remote Swedish B-roads, motorways and even around town. The breadth of this car’s abilities never fails to impress – and so it should, for nearly £120k.

Plant your right foot – at any speed – and it takes off, with 800Nm coming in from only 2,500rpm. It pins you back in your seat with an instant rush from the two turbos. Stopping isn’t an issue, either. The Turbo S has 10-piston 420mm ceramic brakes at the front, giving fade-free performance. This, in conjunction with the PDCC system, helped the top-spec Cayenne smash Land Rover’s SUV Nürburgring lap record by more than 14 seconds towards the end of last year. 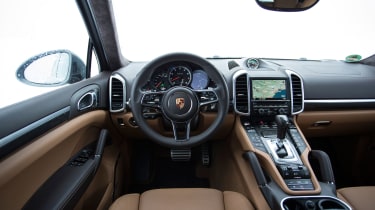 Huge 21-inch alloys, leather sports seats and sat-nav are standard, but a reversing camera, heated windscreen and lane-departure warning are options. The sports exhaust costs nearly £2,000 and the brilliant high-end Burmester stereo comes in at a little over £2,400. It’s clear that Porsche wants very few buyers to walk away with a list price car.

For many, the cheaper GTS will tick all the right boxes. It’s slightly more agile, almost as luxurious and very nearly as fast, but for those wanting the ultimate high performance SUV – and for those who can’t wait for the Bentley Bentega – the Cayenne Turbo S is just as good as it gets.