We get an exclusive ride in the new 321bhp Porsche Cayman S, ahead of its launch later this year 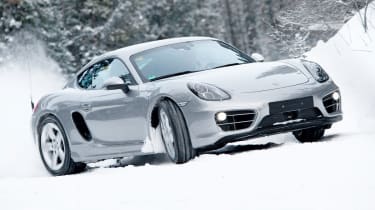 Being a passenger in a brand new version of one of the world’s greatest drivers’ cars is frustrating, especially when there’s a snow-bound wilderness to play in. But despite not driving ourselves, we learned plenty about the latest Cayman’s capabilities. Even on snow, it has loads of grip, which bodes well for the car’s ability on tarmac. And when the rear tyres do let go, supreme balance and agility are still there in abundance. It looks and sounds better, too, with a higher-quality interior. As a result, the Cayman continues to nip at the 911’s heels.

If you had to pick a place to test Porsche’s latest mid-engined, rear-wheel-drive sports car, the frozen Yukon territory in Canada probably wouldn’t be it. You’re more likely to see four-wheel-drive pick-up trucks than low-slung two-seaters around here – but when Porsche invited us along for a ride in the new Cayman, no amount of snow was going to stop us.

“Basically, the car is ready to sell,” chief test engineer Alex Ernst told us. “But there were final adjustments to the production tools. That’s why we’re here. We have to make sure that our cars offer top quality. So far, we are satisfied with the results.”

The new Cayman is based on the same chassis as the latest Boxster, and has a 60mm longer wheelbase, a wider track and shorter overhangs than the old car. Its body is also 44 per cent aluminium, which has led to a 30kg weight reduction.

One thing’s obvious from the passenger seat: in these slippery conditions the Cayman is masses of fun. But the impact of performance improvements (less weight and an extra 5bhp from its 3.4-litre flat six engine) is more difficult to decipher.

Similarly, we can’t feel the benefits of the 15 per cent hike in fuel efficiency, although it’s reassuring to know it’s there.

On winter tyres, there’s a surprising amount of traction, even on deep snow, but razor-sharp throttle response means the conditions still demand respect.

Unless you possess the drifting skills of legendary rally driver Stig Blomqvist, the recalibrated Sport Plus mode is perfect, allowing freedom to enjoy slides without ever losing control of the car. It’s clear the old Cayman’s natural balance has been carried over.

The new electromechanical steering was a bone of contention for the 911, but worked better on the Boxster. Judging by the Cayman’s sharp reactions, it’s not a problem here, either.

We couldn’t get a Porsche engineer to admit it, but the lighter and better-balanced Cayman appears far easier to control than the latest 911.

On this evidence, it looks like the 911’s closest competition could come from within.