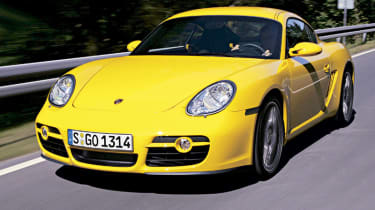 Despite subtle styling differences, the new Cayman is every bit as desirable as the highly muscular S. It’s just as good to drive, loses little visual impact and is sure to hold on to its value. The small performance sacrifice isn’t something every driver will want to make, but for Porsche fans who are on a budget, the Cayman’s lower price will more than make up for it.

Timing is everything when it comes to successful car launches – so why has Porsche chosen to unleash its entry-level Cayman now? After all, the company says sales of the flagship Cayman S are double what was expected. Also, the model cleaned up at this year’s Auto Express New Car Honours awards, easily winning the title of the UK’s best sporting car.

However, Porsche claims that the base Cayman will only serve to extend the appeal of the machine. Described by the manufacturer as cheaper but no less thrilling, the newcomer aims to bring the car to a wider audience.

Boasting a 2.7-litre engine, it may be the entry-level model but, on the road, it has lost none of its bigger brother’s bite. And at £36,220, it is a whopping £7,755 cheaper, too – which puts it firmly in the territory of the Mercedes SLK and BMW Z4 Coupé.

From the outside, there is little to distinguish the base Cayman from the more powerful machine. The squat shape remains unaltered, with the sloping hatchback and 911-inspired nose keep-ing the design aggressive and athletic.

The standard-fit 17-inch five-spoke alloy wheels are the most noticeable difference. Unfortunately, they seem too small for the car and are not particularly sporty, either. Enthusiasts will also notice the black trim around the front spoiler and the single exhaust pipe as the only other changes.

Underneath the skin is the same six-cylinder boxer engine which features in the Boxster, but now uprated to 245bhp and 273Nm of torque. It is identical in design to the larger 295bhp 3.4-litre unit used in the hot S version, but new, lighter and smaller components have been used to reduce weight.

The result is a free-revving motor which propels the car from 0-60mph in 6.1 seconds – that’s only 0.7 seconds slower than the S – and on to a maximum speed of 160mph.

Thanks to Porsche’s Vario-Cam Plus system, there’s plenty of punch in any gear, with torque peaking between 4,600rpm and 6,000rpm. This is accom­panied by a superb engine note; the 3.4 growls just as much as the 3.6-litre unit in the 911 Carrera.

The Cayman is a superb grand tourer, effortlessly sweeping through bends, even at high speeds. Thanks to the low-slung cabin and aerodynamic shape, there’s also very little in the way of wind or road noise.

The chassis is not only extremely stiff, but it’s very well balanced, too. As a result, the Cayman feels incredibly stable on snaking roads and undulating sections of tarmac. Handling on demanding country lanes is equally impressive, with the car offering massive amounts of grip and responding quickly to the driver’s inputs.

While the suspension set-up has been borrowed from the S, it incor-por­ates softer rear springs, smaller anti-roll bars and modified dampers. The ride is smooth – which is thanks in part to those more diminutive alloy wheels – and this machine is easily comfortable enough for everyday use.

Interior quality is as good as in the 911, with excellent fit and finish, while the sports seats are comfortable and the driving position is superb.

The newcomer may not wear an ‘S’ on the boot, but don’t be fooled. The entry-level Cayman is still one of the best sports cars ever produced, and for the money it’s a great package.