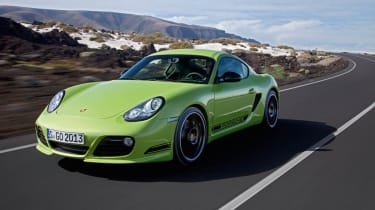 As with lighter, more focused 911s, the Cayman R is all about percentages. It’s not much more powerful or lighter than the Cayman S, and the suspension isn’t much different, but the tweaks combine to produce a highly convincing package. It’s still a usable daily driver, yet is sharper and more enjoyable. This is the car the Cayman should have always been. It’s been well worth the wait.

This lighter, faster Cayman is the car Porsche fans have been waiting for. It wears the maker’s name on its flanks and has the legendary R badge on its bootlid – which points to a 55kg weight saving over the Cayman S.
The Cayman R’s 3.4-litre flat-six develops 10bhp more, at 330bhp. Add the weight saving, and the 0-62mph time is cut by two-tenths to five seconds flat. Choose the PDK paddleshift box option and the Sport Chrono pack, and it drops to 4.7 seconds.
[[{"type":"media","view_mode":"content_narrow","fid":"69311","attributes":{"alt":"","class":"media-image"}}]]
The PDK model is faster, but the slick manual gives a purer, more intense driving experience – and that’s what this car is all about. To achieve its 1,295kg kerbweight, the Cayman R uses aluminium doors, figure-hugging fixed-back sports seats and lighter wheels from Porsche’s motorsport department. The radio and air-con have been removed, too, although you may want to put them back in as they don’t hike the price and enhance comfort.

Even with the ‘luxuries’ fitted, this Cayman is lighter, lower and more intense. A limited-slip diff is standard, as is the unique sports suspension, which drops the car by 20mm. That not only provides the R with a more purposeful stance, but sharpens up the driving experience, too.
While the steering is as incisive as ever, the Cayman R’s responses are even more alert, it turns in with greater conviction and carries more speed through bends. Impressively, this is all achieved without compromising the ride quality; although it’s stiff, it rarely crashes over bumps or less-than-perfect road surfaces.
Typically for a lighter, more focused Porsche, the driving experience is defined by the increased feel and control.
You’re never left guessing what the R is doing, as it communicates precisely the grip on offer, while the Porsche Stability Management (PSM) has been recalibrated to intervene later than on the S. Throttle response is crisp and immediate, with the 3.4-litre engine revving sweetly all the way to its red line.
The standard steel brakes offer plenty of stopping power, but if you plan to take your Cayman R to the track, we think it’s worth ticking the box for Porsche’s optional Ceramic Composite Brakes. These give greater resistance to fade, although at £5,463, they’re far from cheap.
While you’re looking at the extras list, the £1,465 sports exhaust is a must as it adds a fantastic sound. Specify it, then open the window, and you won’t need the air-con or the radio.
Share this on TwitterShare this on FacebookEmail