The all-new Porsche Cayman has already impressed, but is it just as good on British roads? We find out... 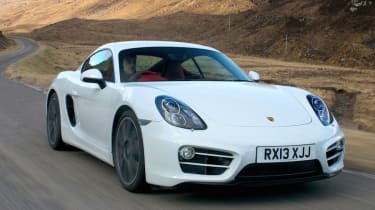 Few cars at any price are as sublime to drive as the Porsche Cayman. Faster, cleaner, roomier and better looking than the outgoing car, it’s superbly engineered and great value. The handling is unequalled and it’s very easy to live with day-to-day. The 2.7-litre engine is smooth and eager, giving more than enough performance for most. The Cayman makes you feel special every time you drive it, and is one of the finest sports cars money can buy.

The new Porsche Cayman has arrived in the UK, and we jumped behind the wheel to see what it’s like on British tarmac.

Ever since the original mid-engined coupe debuted in 2005, it’s had an unrivalled reputation as a driver’s car, so the new Cayman has been eagerly awaited.

While it has a similar profile, it’s lower and wider with more muscular proportions and sharper detailing. Like the Boxster, the slender rear spoiler runs neatly into the tail-lamps, and our entry-level Cayman looks just as good as the Cayman S.

Under the skin is a 2.7-litre engine, but it has 10bhp more power than the old 2.9-litre, at 271bhp. The all-new chassis has a longer wheelbase, and is also lighter, and as a result the car is faster than before, with 0-62mph in 5.7 seconds. It’s also more efficient, returning 34.4mpg.

Opt for the PDK transmission, and you shave a further tenth off the sprint time and boost fuel economy to 36.7mpg. But as good as Porsche’s double-clutch gearbox is, the super-precise six-speed manual is great to use.

Either way, the Cayman driving experience is sensational. The 2.7-litre engine pulls strongly from 4,000rpm, taking on a lovely guttural bark as the revs rise to the 7,400rpm red line.

Performance isn’t as instant as in the 3.4-litre S, but the 2.7 has more than enough pace and, unlike more powerful cars, lets you savour the full rev range within the confines of UK roads. Throttle response is superb and becomes keener if you press the standard Sport button, but it’s in corners that this car really shines.

With a 40mm wider track and bigger wheels, there’s more grip, so traction is near-unbreakable. Plus, the beautifully weighted electric steering lets you place the car accurately, while the controls deliver a stream of feedback.

Body control is superb, and a 40 per cent increase in torsional rigidity and wonderful damping ensure the Cayman is untroubled by bumps and feels stable at speed. Strong brakes and two-stage stability control inspire even more confidence.

The PASM active suspension option adds more polish, but even without it, the car balances handling and comfort superbly. A great driving position and minimal road noise mean it’s just as good at cruising.

Even better, with the front and rear boots offering 425 litres, it’s more practical than most rivals. Plus, the cabin matches the 911’s upmarket appeal, with first-rate materials and a modern design.

Standard kit includes a central touchscreen and TFT instrument display, plus auto lights and air-con. Options are pricey, but the Cayman is so talented, the sub-£40,000 price still looks a steal.