The new look is evolutionary, but the Cayman still sets the handling and quality benchmarks 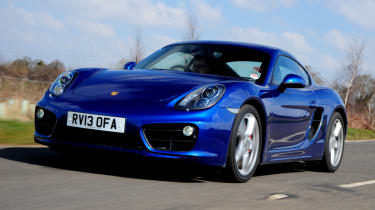 The new Cayman S is a truly fantastic all-rounder. It’s a joy to drive hard, but it’s equally engaging at low speeds. Plus, with two luggage areas it’s a practical choice, and even without PASM dampers it rides well. It’s also cleaner, more fuel efficient and cheaper to own than ever before.

With the legendary 911 celebrating its 50th birthday this year, the launch of a new Cayman is a timely reminder that there’s more than one coupe in Porsche’s line-up.

In fact, while the rear-engined 911 is synonymous with Porsche, the brand was making mid-engined cars as far back as 1953. In more recent times, the Boxster and Cayman have continued to prove the pedigree of the mid-engined layout, so expectations are understandably high for the all-new Cayman.

At first sight, and in typical Porsche fashion, the Cayman’s overall look is similar to before, but the wheelbase has grown by 60mm, while a 10mm wider track and larger wheels put a bigger footprint on the tarmac. The newcomer is also 10mm lower, the proportions are more muscular, while sharp detailing – like the rear spoiler that cuts into the tail-lights – gives it a more dynamic look.

Clever packaging means decent boot space in the nose and tail, and the build quality and comfort of the Boxster-derived cabin is beyond doubt. A faultless driving position and superbly laid-out controls further enhance the feel-good factor behind the wheel.

Nestled away out of sight in the centre of the car is a 3.4-litre flat-six and, while you can’t see it, the engine makes its presence felt as soon as you fire it up. On the move, there’s a deep wave of torque from low revs, while from 5,000rpm onwards you’re treated to an intoxicating flat-six bark all the way to the 7,500rpm red line. The engine’s flexibility is enhanced by the optional double-clutch PDK transmission fitted to our car. In-gear response is strong, while automated throttle blips when you shift down add to the drama.

The Cayman trails its rivals on torque, with an output of 370Nm, but thanks to a kerbweight of 1,350kg – a full 125kg less than the Audi’s – it sprinted from 0-60mph in four seconds and ran the 465Nm TT very close in-gear. It outperformed the Lotus across the board, too.

Yet it’s in corners where the Porsche’s brilliance really shines through. The new car is 30kg lighter than its predecessor, but the chassis is 40 per cent stiffer. Add in near-perfect weight distribution and wider tyres, and the result is fantastic handling. There’s an abundance of grip and traction, superb body control and perfectly weighted steering, which allows you to tackle bends with pinpoint accuracy.

All of the controls stream with feedback, and few cars feel as composed and engaging on a twisty road. With the optional Sport Chrono Pack fitted, dynamic gearbox mounts tighten up the chassis a fraction more, while the Sport and Sport Plus driving modes deliver even sharper throttle response plus sportier PDK and stability control settings.

Our car wasn’t fitted with PASM active dampers, yet it still rode very well, soaking up mid-corner bumps with ease. By comparison, the Lotus felt hard-edged, and the Audi was uncomfortably rigid. Aside from a little bit of tyre roar from the big 19-inch wheels, refinement at speed is excellent, and the Cayman S strikes a great balance between handling and comfort.

Standard equipment includes xenon lights, part-leather seats and a seven-inch touchscreen, but cruise control, full leather and sat-nav are on the lengthy, and often costly, options list. And with huge scope to personalise your Cayman, it’s easy to nudge the price towards the £60,000 mark, bringing it close to the Evora S. However, even if you stick to a fairly standard spec, you won’t feel short-changed, as few sports cars at any price can match the Cayman’s driving experience.

And then there’s the rest of the financial case. Emissions of 188g/km make it a cheaper company car choice than either rival here. And even with plenty of keen driving, we averaged 26mpg over the course of our test. Arguably, that makes the Cayman S an even greater performance car bargain.