Which of these powerful cordless drills is our pick for DIY jobs on the car? Read on to find out... 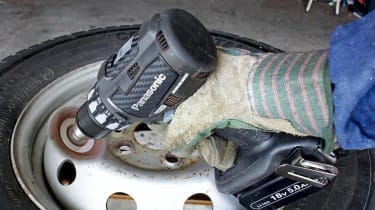 One of the most versatile tools in your armoury is the cordless drill; as well as drilling, it can be a screwdriver, wire brush and a buffer. The latest motors run off ever-more-efficient batteries to make them almost the equal of a mains drill and very useful where your garage has no 240V outlet. So which is the one to take the strain out of your jobs? We charged eight to find out.

Each drill had to power through our tough test regime, which included five minutes’ no-load running plus the same time wire-brushing thick rust off a steel plate. We also drove large screws into wood to assess torque, drilled into various metals, and looked for a comfortable balance to make them easy to use over long periods.

As well as pure performance, we also gave marks for features such as a case, the number and size of each drill’s batteries, a power-pack condition gauge, LED work light and torque settings. Warranty and price were the final factors.

Once again, the multiple-test-winning HiKOKI shows rivals how it should be done and retains the top spot. But the result was very close and a favourable shift on the Sealey’s price could see a change between the two. If it’s massive torque you need, you won’t regret choosing the new Draper, which takes the final podium spot. 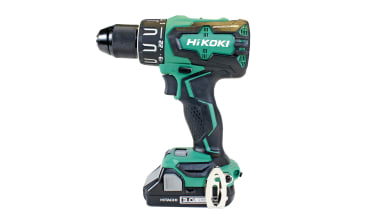 The competition is stacking up against our multiple winner; other drills offer more Amp hours (Ah), higher speeds and better torque. But the HiKOKI still gives the best combination of all factors. It has plenty of power, although we’d like more than two battery-state LEDs. The spec includes 70Nm of torque, a large case, base-mounted light, 1,800 rpm no-load speed and 22 torque settings. It charged through our tests with ease, and its price gives it an edge over its closest rivals. 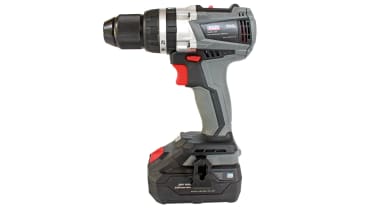 Sealey’s 20V kit remains as impressive as it was in last year’s mini test, with a spec very similar to our winner. It, too, boasts 6Ah capability (split 2Ah and 4Ah), with the highest no-load speed, at 2,000rpm, and a respectable 65Nm of torque. Our tests presented no problems and it still had around 33 per cent of its 4Ah left at the end. It gets a three-year warranty but while its canvas bag kept the components together, it was not as neat as a case. Still, a great device, and a better price would have pushed it up a position. 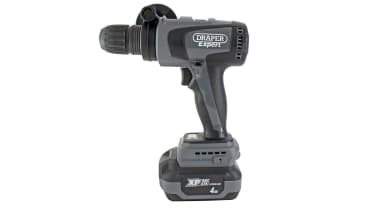 What a dramatic debut from this Draper, with the most torque – a phenomenal 135Nm. This was most noticeable on the wire-brushing test, where we appreciated the auxiliary handle supplied. It also had electronic selection for the 24 torque settings and a top speed of 1,950rpm. Indicators on the battery showed it was clearly efficient, with around 50 per cent left when we finished. It comes with a three-year warranty but only one battery, and at £205, is a bit pricey, yet it still finishes within an ace of the top spot. 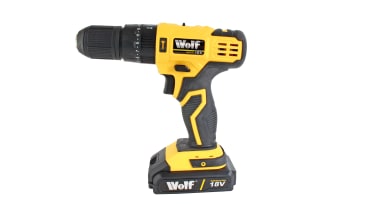 The Wolf performed well, despite not being brushless and having the second-lowest torque (35Nm). It’s offered with a single battery (112529) or, as here, with a pair of power packs in the hard plastic case. We were pleased to see they now come with a trio of charge-state LEDs. The drill also came with six bits, the same number of driver bits, and a magnetic holder. At just 1.4kg, it was second lightest and very wieldy, especially for hard jobs like wire-brushing, although this made it work harder than some. A great option if you don’t need too much power. 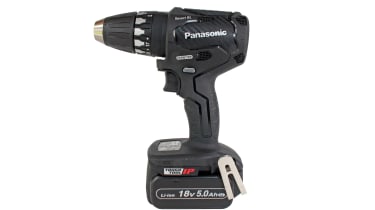 Another gem from Panasonic, with its smooth brushless motor, 5Ah battery and some nice new features. We liked the digital speed limiter – which restricted the device to high, medium and low – the automatic speed adjustment, and the neat tap mode, which switched alternately between forward and reverse when tapping a thread. Despite only quoting 50Nm torque, it whizzed easily through the tests, with around 60 per cent battery life left at the end. It was the only one here not to feature hammer action, an odd omission especially at this price, which didn’t include the £28.80 case. 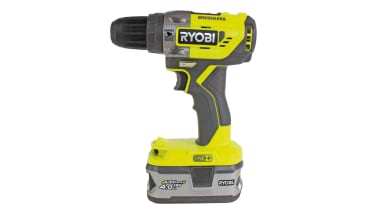 It’s hard not to like the Ryobi, which is the same length and weight as the HiKOKI (185mm/1.85kg), and with a similarly free-spinning motor that absolutely crushed our tests. We noted that the 4Ah battery was physically bigger than others of the same capacity, but it certainly did the trick because even after all the tests, all four LEDs were still showing. We also liked its e-Torque automatic torque-setting mode, which sensed when a screw was tight enough and stopped – brilliant. We’d have liked a case for this price, though. 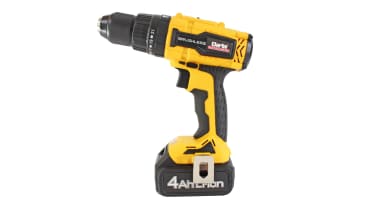 You’d have to be doing lots of work to run out of battery with this kit; the Clarke comes with a full 8Ah worth of batteries in its strong, moulded case – the highest here. Nicely balanced, at 205mm and 1.86kg, it performed well on all the tests. Its 50Nm of torque was adequate, but irritatingly, we had no way of knowing the battery state. The instructions were good, and its controls simple to use, and all the better for it. We liked the 21 torque settings, but thought the one-year warranty mean (the others had three years’ cover, except the Wolf, with two). 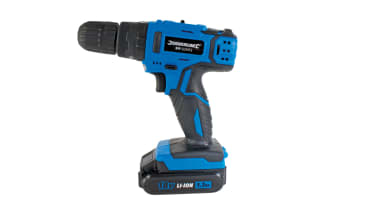 The Silverline lacked many of the features of the others, but the name says it all; this is a DIY device and not designed for heavy use. Physically the lightest here, at 1.2kg, it was very wieldy when drilling and screwing. It had just a 10mm (rather than 13mm) chuck, the lowest torque of the test, at 30Nm, and the smallest battery, at 1.3Ah. That said, it almost finished all our tests, which was impressive, although it struggled when performing torque-heavy tests such as the wire-brushing. It did come with an LED light but there was no battery-condition indicator, and the instructions would benefit from some diagrams and/or photos.

For more product group test reviews, take a look at our accessories and tyres hub page.