What's the best outdoor car cover? We tested eight products to find the ideal cover for shielding your car from the elements 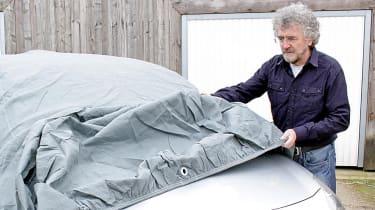 Many drivers turn to outdoor car covers in the absence of a garage, either because they don't have access to indoor storage or because the garage they do have is full of other household possessions. In either case, a car cover is an excellent way to protect your motor from potentially harmful substances such as rain, tree sap, dirt and bird poo when brick-built coverage isn’t an option.

And as well as protection from airborne nasties, bodywork is less vulnerable to scratches and fading (caused by due ultraviolet light from the sun) when shielded by a car cover. A quality car cover is therefore a sound investment, but which is the best on the market? To find out, we tested eight car cover products sized to fit a 2006 Renault Clio.

Breathability is very important because moisture trapped under a cover can damage paint. We assessed this by placing each product over a steam-filled box with a moisture trap above, noting the results after five minutes.

All of the tested products passed our leak test, resisting 500ml of water for 10 minutes. Our drop test rated the protection offered against accidental bumps, and we also marked ease of use, tether straps, quality and fit. Security cable mountings, mirror pockets and zipped door panels were also taken into account.

Price from online sources was the final factor, although will vary depending on car size.

Halfords and Sealey would be good choices for all-round use at a reasonable price. For the increased protection, particularly if you leave your car untouched for longer periods, a premium option is the way to go and the Concours Eclipse would be our pick. 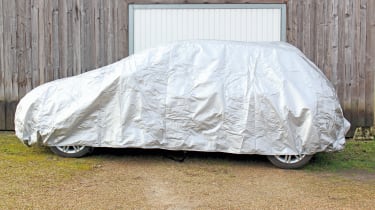 The new All Seasons range comprises five covers in sizes XS to XL, making it easier to get exactly the right fit. We liked the soft protective inner lining, and found the breathability extremely good. The knock protection was much better than its test rivals’, but that wasn’t surprising given that it was almost twice the weight of the last winner, at 4.9kg. The fit was good, with elastic sections front and rear, and three tethers to pass under the vehicle. The reflective silver finish may be an acquired taste, yet it shrugged off moisture very effectively. But prices are higher, stepping up in £5 increments from the XS at £55, to the XL at £75, making the medium we tested £28 more than the current champion. It’s a good choice if you need the extra performance, but hard to justify if not. 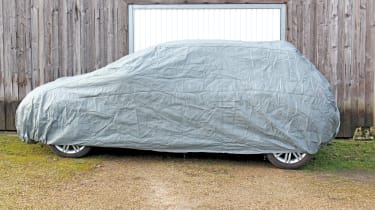 The SCCM was runner-up to Halfords’ Car Cover in our 2017 test. While its looks, construction and performance were very similar, it lost points on price. That has risen by about £8 but, crucially, the gap has increased, because the price of the winning Halfords cover has dropped. The Sealey remains a decent choice; it’s light enough to be practical, at 2.6kg, yet thick enough to provide reasonable in-garage bump protection. It extended well down the sides of the car to offer total lateral protection, with the three tethers holding it well underneath, and the elasticated sections at either end making it secure enough for just about all weather conditions. It’s still a great cover, but the price gap to the previous top-scoring Halfords has increased and the firm’s new one has better performance for just £5 more. 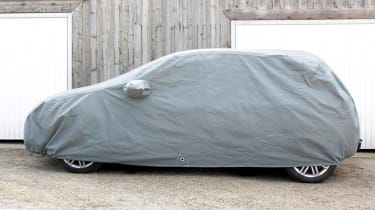 It was close between the three premium covers. The four-layer Eclipse trailed the other two for knocks and breathability, but only just, and it’s cheaper. Its fit was all but perfect and the large mirror pockets made this easy. At 3.2kg, it gave protection but was still easy to handle. Two tethers kept it in place and the buckles’ silicone covers prevent scratching. A central plastic eyelet takes the optional security cable. 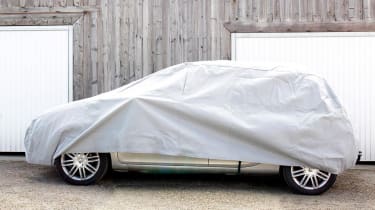 Available in 30 sizes, this was excellent, and its complex five-layer design accounted for its 4kg weight and brilliant breathability and knock test performance. We liked the fluffy protective soft lining to protect the paintwork and twin fitted tethers, backing up the elastics which fitted snugly under the front/rear valances. But at the price, we’d have liked mirror pockets, a security eyelet and a bit more length down the sides of the car.

Buy it from HamiltonClassic here 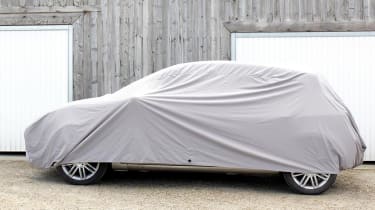 The Ultimate was just that in our breathability and knock tests; no surprise, as it weighed almost 5kg. But combined with its smooth finish, this made it hard to fit solo. We liked the three strong tethers, plus the neatly sewn flaps that kept buckles off paint. Yet their positioning meant we could only use the centre one, which had a large security eyelet.

Buy it from Classic Additions here 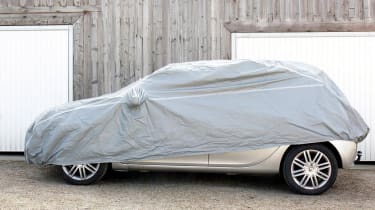 The Cosmos was well priced, especially as it had a zipped section allowing the driver’s door to be opened without removing the cover. We also liked the mirror pockets, although they were tight. In fact, the whole cover was tight; we couldn’t get it to pull over the rear valance and it only had one tether. Mid-range in the knock test, but poor breathability. 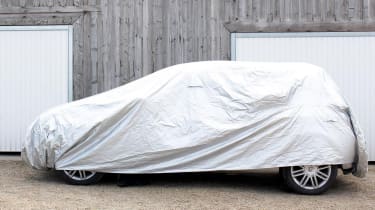 Shiny silver cover was the lightest here, at 2kg, and while you’d need help in a breeze, it easily slipped over the car. But it struggled in the knock test. It’s not classed as breathable, yet side vents would help dispel moisture; just not from the large roof, bonnet or boot panels. Two fixed tethers gave good security, but it was too long, and bunched at the rear. 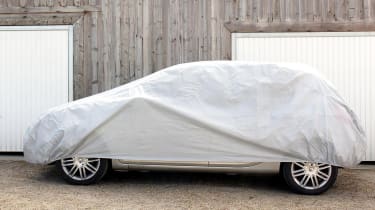 The Clarke proved tough, but at just 2.3kg, it didn’t do well in our knock test. We liked the soft inner lining that protected paint. Yet it had no tethers, relying on elastic front and rear. This made it less secure, especially as we couldn’t get it below the rear valance. Not breathable but cheap, so could be handy where violence and moisture aren’t issues.

Buy it from MachineMart here