Both Renault and Nissan offer up to £2,000 on top of additional discounts for owners trading in their pre-Euro 5 vehicles 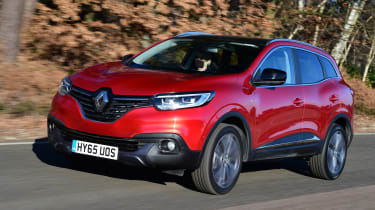 Both Renault and Nissan have announced their separate vehicle scrappage schemes in the UK, offering up to £2,000 towards a new Renault or Nissan on top of additional incentives.

Nissan’s Switch Scheme runs from 1 to 30 September 2017 and applies to owners of cars and vans with pre-Euro 5 engines. The company is offering up to £2,000 in scrappage support on top of the trade-in value and existing discounts on new vehicles.

Nissan says drivers can earn up to £5,000 towards a new model like the X-Trail when trading in their old car. Those looking to switch to an all-electric vehicle are given £2,000 plus vehicle trade-in value towards an approved-used Nissan Leaf 24kWh.

Renault’s scrappage scheme also applies for Euro 4 vehicles or older that have been owned by the current owner for at least 90 days. The scheme runs until the end of September 2017, with orders having to be registered by January 2018.

Renault is offering a flat £2,000 scrappage fee on top of existing discounts. The scheme allows buyers to save up to £7,000 on new vans like the Master Van and £5,200 on cars like the Kadjar.

Unlike Nissan, Renault isn’t offering any scrappage incentives towards its all-electric ZOE, stating customers already benefit from a separate £5,000 allowance towards the purchase price. This is on top of the existing £4,500 Government Plug-in Car Grant.

For a full breakdown of the Nissan and Renault scrappage schemes see tables below:

Would you trade in your old vehicle for £2,000 off the price of a new car? Tell us in the comments below...