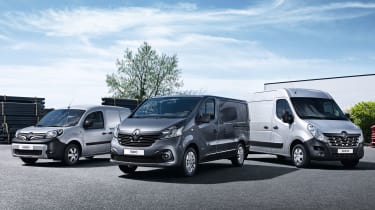 Renault has announced a raft of updates for its van range, including Euro 6 emission compliant engines on Kangoo, Trafic and Master models and enhanced specifications. The vans are available to order now with the irst deliveries expected soon.

The Kangoo was previously the only model offered with Euro 6 engines in the Renault range. It now benefits from an expanded range giving buyers of the small van additional choice. The Maxi version in particular now has more configurations available than before in combination with the new engines. Combined fuel economy of up to 62.8mpg is possible from the new versions, which are priced from £14,150.

Moving up the range the Trafic sees the Energy dCi 95 engine for the first time, with prices starting from £19,325. The Euro 6 Trafic range is completed with dCi 120, 125 and 145 versions, with the latter pair utilising twin-turbo technology.

The largest van Renault offers, the Master panel van, is offered with dCi 110, Energy dCi 110 and dCi 130 single turbo Euro 6 engines together with twin turbo Energy dCI 145 and 170 versions. For rear-wheel drive applications Renault offer the Energy dCi 165. Each version is around 5-10bhp more powerful than its respective predecessor. Prices for the updated Master start from £22,270.