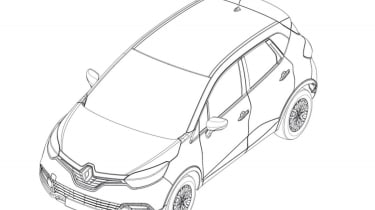 This is what the new Renault Captur will look like when it makes its world debut at the Geneva Motor Show next year.

These leaked images of the patent drawings submitted by Renault show that the sister car to the Nissan Juke won't look as dramatic as the concept shown at the 2011 Geneva Motor Show. However, the Captur is immediately recognisable as a member of the Renault family.

It translates the Renault Clio design into crossover form well, with the same front-end styling and headlamps that taper around the front corners, but with increased ground clearance and off-road cladding around the doors and bumpers.

In profile, there’s the same concave crease that runs along the lower part of the doors as the Clio, too, as well as an integrated spoiler at the rear. Look closely at where the tailgate finishes, and you’ll see that there’s a low loading lip for easy access to the boot.

The Captur’s engine range will mirror that of the new Clio’s, which means it will be offered with a super-efficient 1.5-litre diesel engine, as well as 1.2-litre and 1.6-litre petrol engines. The diesel will be the most efficient - it offers up to 78.4mpg and 94g/km in the Clio, so shouldn’t be too far behind these figures in the Captur.

While it's yet to be confirmed, there may also be a RenaultSport version of the Captur, given that Nissan has released a Juke Nismo, which is powered by the same 197bhp 1.6-litre turbo petrol engine as the forthcoming Clio RS.

Renault is also yet to officially confirm that the car will be called the Captur, but these images suggest that it’s sticking with the name as it brings the crossover to showrooms.

Welcome to our Geneva Motor Show hub page, scroll down for all our Geneva content...
New 2020 Renault Captur: prices, engines and specs 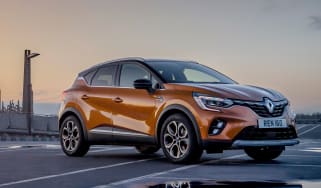 The Renault Captur offers buyers a choice of petrol, diesel or plug-in hybrid powertrains – and it’ll be available with a petrol hybrid unit in 2021
Best crossover cars and small SUVs 2020