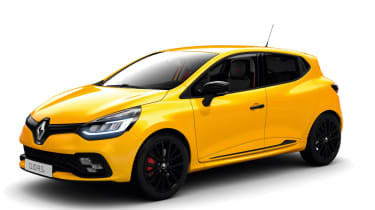 Renault has released a new styling pack for the Renaultsport Clio, which updates both the regular 200 and 220 Trophy versions of the firm’s Ford Fiesta ST rival with black exterior touches.

Unsurprisingly, it’s called the Black Edition option pack, and costs £350 - £200 if you have a Clio 220 Trophy, as it is already fitted with the 17-inch black alloy wheels included.

Elsewhere, the pack adds black gloss door handles and side mouldings, a black gloss front lip in the bumper and rear diffuser, plus special black gloss badging and tailgate moulding.

The pack doesn’t introduce any performance changes, so under the skin it’s as you were – a 1.6-litre turbocharged four-cylinder engine sends power to the front wheels via a six-speed dual-clutch automatic gearbox with paddleshifters. Power is rated at 197bhp for the Clio 200, and 217bhp for the 220 Trophy.

The current Clio has been around since 2012, with the hot Renaultsport edition hitting the market here in the UK in 2013. The next hot hatch to emerge from Renault won’t be its replacement however – the Renaultsport Clio will gain a new big brother at the Frankfurt Motor Show in the form of the new 300bhp Megane RS, which you can read about here.

Is the Renaultsport Clio still on your hot hatch shopping list? Tell us in the comments...