Renault's new 163bhp 1.6-litre turbo petrol engine has been fitted to the brand's Kadjar crossover, but is it a perfect match? 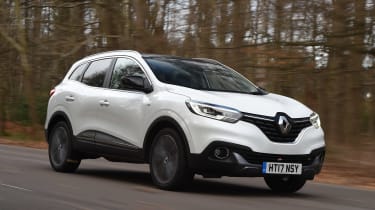 While the Renault Kadjar is no longer our top pick in a competitive crossover class, it’s still a fantastic family car. It’s practical, comfortable and refined; it drives well and offers loads of standard equipment. For most, though, the more economical diesels or the cheaper TCe 130 turbo will be a better bet – offering almost all the performance and superior value for money.

Two years ago, the Renault Kadjar was our favourite mid-size SUV. Since then, however, it’s been surpassed by a host of rivals including the SEAT Ateca and Peugeot 3008. That’s not to say the French crossover isn’t still a fine family car – it’s just that the segment has stepped up a notch.

To broaden the Kadjar’s appeal and bring it back to the forefront, Renault has added a new 163bhp 1.6-litre turbo petrol engine to the range. It’s available on all models apart from the entry-level Expression+ and is the exact same unit found in the updated Nissan Qashqai.

On paper, it offers competitive numbers – both in terms of performance and running costs. It’ll do 0-62mph in a respectable 9.2 seconds, return 45.6mpg and emit only 139g/km of CO2. In top-spec Singnature S Nav trim, it undercuts the automatic-only but identically-powered 3008 GT Line by almost £3,000. 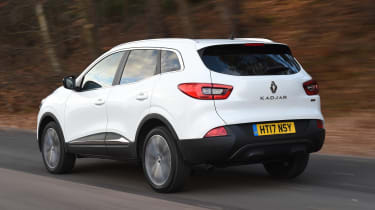 On the road, however, it’s a different story. If you’re used to driving a diesel SUV, you’ll miss the punchy torque delivery and low-end shove. The Kadjar TCe needs to be worked hard to extract all that performance, and in-gear acceleration feels inferior to the less-powerful dCi 130, too.

Having to work it so much harder means you’ll spend more time in the upper reaches of the rev band as well. It isn’t the most tuneful engine, either, so you’ll find yourself doing all you can to drive more sedately.

It’s a shame, really, because the Kadjar is still a smart-handling SUV. It’ll hold its own in the bends, and while it isn’t as sharp as an Ateca, the softer ride means it’s far more comfortable on longer motorway journeys. At a cruise, the petrol engine is suitably hushed, though that cushioned ride was hampered slightly by our test car’s 19-inch wheels.

Speaking of which, you can’t argue with the Kadjar’s kit list. Most will find the cheaper Dynamique Nav model offers all the equipment you’d either want or need, but if a swish SUV is top of your wish list, this car’s parking camera, leather upholstery and panoramic roof should tick all the right boxes.