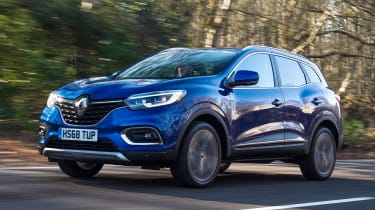 Our first taste of the revised Renault Kadjar in the UK confirms that the new 1.3-litre turbocharged engine is the pick of the updated model range. The smooth, refined petrol engine is more frugal than the 1.2-litre unit it replaces, while elsewhere the Kadjar remains just as easy to drive and live with as before. The S Edition comes with plenty of equipment, but the cheaper Iconic offers pretty much everything you really need for £1,500 less.

The Renault Kadjar has been a popular choice within the family crossover class since its launch. Now, for 2019, the range has received a host of updates to keep it competitive against the likes of the Skoda Karoq and Nissan Qashqai.

There’s a tweaked design front and rear, minor cabin improvements, and the introduction of a new trim level. The Renault Kadjar S Edition sits between the existing Iconic and GT Line levels, neatly splitting the £3,000 price gap right down the middle.

Every engine option in the range is either all-new or heavily revised. There’s an updated 1.5-litre diesel and a new 1.7-litre unit takes the place of the old 1.6 dCi. But the big seller is expected to be the 138bhp 1.3-litre turbocharged petrol unit we’re driving here. The engine was co-developed with Mercedes, and in varying states of tune finds service in the A-Class, B-Class, and the Qashqai, too. 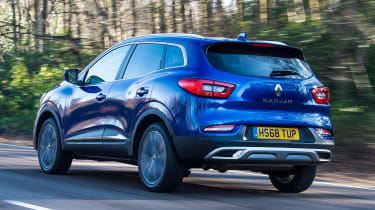 A more powerful 158bhp version is offered, too; the pair replace the previous 1.2 and 1.6-litre turbocharged units, and each provide similar or better performance while also increasing fuel efficiency.

As it turns out, the 138bhp version feels as if it’s all most buyers will ever need. It’s fairly smooth, accelerates enthusiastically, and in the real world doesn’t feel any slower than the more powerful option. If anything, in this iteration it sounds more refined than it does in the A-Class, too.

As standard, the 1.3 turbo is paired with a six-speed manual gearbox. It isn’t as snappy as a Honda CR-V’s box, nor as slick as a Karoq’s, but it’s decent enough. A seven-speed automatic gearbox is offered for an extra £1,500, and it shifts smoothly, but is a little slow to respond when pulling away from a standstill.

The Kadjar’s chassis settings stay much the same as they did before. In other words, the light steering makes it dead easy to drive around town, and it’s reasonably comfortable, even on 19-inch alloy wheels. It isn’t as fun to drive as, say, a SEAT Ateca, but that’s unlikely to be a big deal.

What will matter, is the Renault’s dated infotainment system. Despite improvements for 2019, including a more responsive screen, quicker loading times, and standard Apple CarPlay and Android Auto throughout the range, it’s still let down by fussy graphics displayed on a small seven-inch screen. Overall, it’s not as intuitive as the SEAT’s set-up. 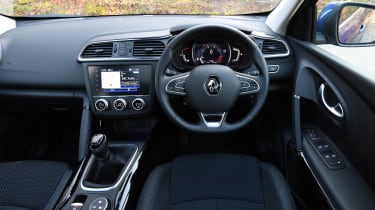 Another update in the Kadjar’s largely unchanged cabin are the revised air conditioning controls. Three big dials each feature mini screens within them, displaying temperature and fan speed. They’re dead easy to use, and not only better than the fiddly buttons of the old Kadjar, but better than most rivals’ designs, too. Elsewhere, the Kadjar is roomy in the back, and the 472-litre boot is bigger than the Qashqai’s.

But what does the new trim level offer? Above the Iconic’s already generous kit list, the S Edition adds LED headlights and fog lights, extra bits of chrome trim, a panoramic glass roof, and a faux leather/fabric upholstery with contrasting blue stitching. It does seem a little mean that only the top spec GT-Line gets safety kit like autonomous emergency braking, blind spot monitoring and lane keeping assist as standard, though.

While we’d normally recommend the Iconic trim, Renault’s current finance offers for the Play make the entry-level model the most tempting. While it lacks the 19-inch alloy wheels, satellite navigation and front parking sensors of the Iconic, a current zero per cent PCP deal means that a Play TCe with the 1.3 turbo engine costs just £199 per month on a three-year deal. The rest of the range doesn’t offer the same zero per cent deal, so matching the £4,000-or-so deposit on Iconic trim will result in you spending an extra £42 per month. The S Edition, meanwhile, costs £261 per month.