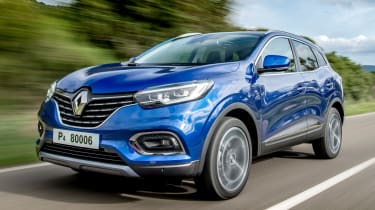 The Renault Kadjar has always deserved serious consideration among the usual crop of family crossovers, and the latest updates raise its game further. The new engines mark the biggest improvement, and deliver strong performance with the promise of great fuel economy. Some rivals are better to drive, and some feel more special inside, but as a practical, comfortable all-rounder, the Kadjar is hard to fault.

This is the refreshed-for-2019 Renault Kadjar SUV. The C-segment crossover has been treated to a variety of tweaks to keep it fresh - vitally important, considering it sits in arguably the busiest and most competitive new car class. So are the changes enough to make it worth choosing over a SEAT Ateca, Ford Kuga or Nissan Qashqai?

As before, the Kadjar is mechanically similar to the Qashqai, and the latest updates include the same overhauled engine lineup which was recently introduced to its Nissan cousin.

The diesel range kicks off with an updated version of the existing 1.5 dCi; there’s now an Adblue filter to reduce emissions, more soundproofing around the block and a nominal power and torque increase. The old 1.6 has been redeveloped into a 1.7-litre unit which, with 148bhp on tap, is significantly more muscular than before. It's also the only Kadjar offered with four-wheel drive and a locking differential. 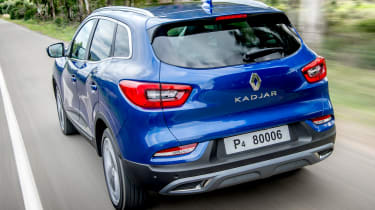 But in a sign of how the market has changed within the last year or two, it's the petrol engines that are expected to account for almost 70 per cent of Kadjar sales in the UK. A new 1.3 litre turbocharged unit, co-developed with Daimler, is available in two outputs. There's a 158bhp unit at the top of the range, and a 138bhp version driven here.

Along with the new engines, the Kadjar is treated to a styling revamp. The front grille is wider and gets new chrome inserts, and the number plate is moved upwards to emphasise the 4x4-inspired splitter. Around the back, there's a new bumper with integrated LED reversing lights; and the brighter lighting tech is also applied to the tail lights and indicators.

The exterior changes are finished off with the introduction of a few new alloy wheel designs and three new colours: Oural Green, Highland Grey and, on the top two trim levels, Iron Blue.

Inside, Renault has made a series of small detail improvements. They don’t transform what is still a slightly bland cabin, but the changes are all positive. The redesigned seats, for example, are more supportive than before (particularly at the sides), there's a new sliding centre armrest, while illuminated window switchgear from the Megane looks more expensive. The centre console cup holders are an improvement on before, but still comically shallow. 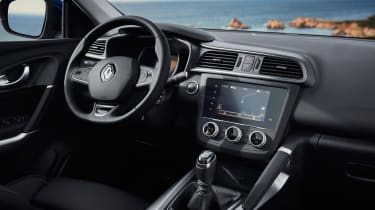 The new climate controls are great, too: three big dials each have built-in screens to show temperature and blower direction. They're dead easy to use and look much better than before.

The touchscreen, now installed flush to the dash, looks much tidier and is more responsive to the touch. It’s just a shame that it’s still hampered by the same slow loading times, clunky menus and messy graphics. At least Apple CarPlay and Android Auto are standard across the range now.

Little has changed from a chassis point of view, so it's the new engines which make the difference to the way the car drives. The news is pretty much universally positive: the 138bhp unit is much stronger than the outgoing 1.2 throughout the rev range. While it’s not the smoothest unit when revved hard, it settles down into a hushed cruise. 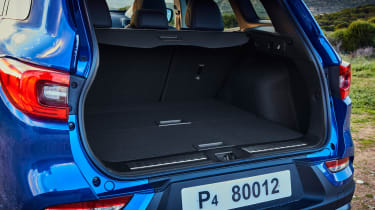 If anything, this version of the engine performs so well that it’s questionable whether or not the more potent option is really necessary. The 158bhp version is claimed to be 0.5 seconds quicker to 0-62mph, but the difference is barely noticeable even when the pair are driven back-to-back.

Both are available with a choice of six-speed manual or seven-speed automatic gearboxes. The manual is pleasant enough, and although the auto is easier to use around town, it can be slow to kick down when you want to accelerate or overtake.

Elsewhere, the Kadjar driving experience is as before: on the 19-inch wheel model we sampled, the ride is slightly firmer than in the Qashqai yet smoother than a SEAT Ateca. Turn into a corner and body control is reasonable, and the steering is precise enough, if offering little feel. Not fun, but perfectly adequate for a practical family car.

And that's where the Renault fares well. It's 472 lite boot is larger than the Nissan, and it's got plenty of space inside for five. Back seat passengers are now treated to central air vents and a pair of USB sockets. 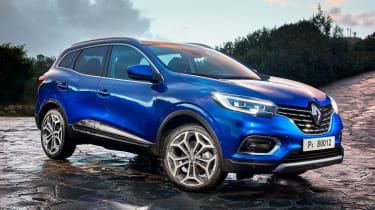 The range starts from £20,995, in Play trim - one of four available. Standard equipment includes 17-inch alloy wheels, climate control and that 7-inch touchscreen with smartphone integration. The pick of the range looks to be the Iconic, which, for £1,500 more, adds 19-inch alloys, satellite navigation, a reversing camera, and lane departure warning.

And at that price, it compares very favourably with its closest rival. Compare the Kadjar Iconic with the roughly equivalent Nissan Qashqai N-Connecta with identical 138bhp engines, and the Renault is £2,500 cheaper. Renault is yet to release finance deals, but even though the Nissan’s offers are very competitive at the moment, that’s a big difference if you bear in mind that the pair are much the same to drive and the Renault has more space inside.