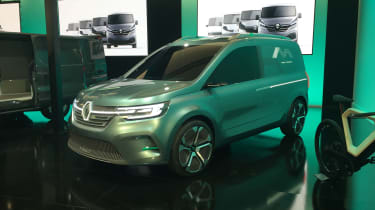 This is the Renault Kangoo ZE Concept, an all-electric show car that previews the look of the next-generation Kangoo small van, which is scheduled to arrive in dealers in 2020.

In terms of design, the concept foregoes the ageing, boxy design of the current Kangoo in favour of a more sculpted car-like shape, although according to bosses this new design doesn't have an impact on the shape or size of the cargo area. In fact, a wider rear track boosts space in the back when compared to the current Kangoo van. And according to Renault design boss Laurens van den Acker, it's around 80% towards the production model.

There's a smooth Megane-style appearance to the concept's exterior, which is broken up by a two-bar grille and lower air vents in the front and rear bumpers with grilles inspired by those seen on computers, while the green detailing is borrowed from the EZ-Pro autonomous delivery concept, which was shown at the Hannover CV show last September.

Up front, there's a fully glazed and transparent 'grille' which showcases the C-shaped lights with a connecting light strip between them and framing Renault's diamond badge. There's also a green graphic that encircles the rear and sides of the concept, joining the boot logo, sliding door tracks and door handles.

As the name suggests, the Kangoo ZE is fully electric, although no details have been given about its drivetrain. We'll have to wait until the production Kangoo is revealed before we know the driving range and power of the electric transmission, although the Kangoo ZE is likely to make use of the running gear from the Nissan Leaf, so will exceed the 90-mile range possible in the current model.

As well as the Kangoo Concept, Renault also revealed a wooden electric bicycle to go with the van for deliveries in restricted areas. The bike was built in collaboration with Keim Cycles, which has also worked with Renault on the TreZor and Symbioz concept cars.

What do you think of the new Kangoo ZE concept? Let us know in the comments...