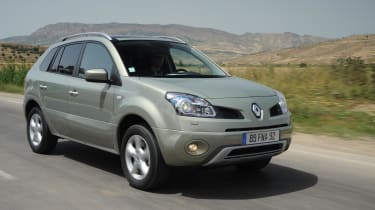 The Koleos is Renault’s first proper 4x4 but features tried and tested four-wheel drive technology from Nissan. It is also well equipped and attractively priced but it brings nothing new or original to the SUV market. Competition is fierce and, while the Renault majors on comfort and refinement, its uninspiring looks and bland cabin count against it. Lesser models arguably merit an extra star thanks to their value for money, but more talented and desirable rivals outshine the range-topping Koleos.

Is it better late than never for Renault? The firm has just launched the first SUV in its history but with rivals including the Ford Kuga, VW Tiguan and Nissan Qashqai, has the new Koleos been worth the wait?

To take care of the off-road bits Renault has pillaged Nissan’s four-wheel drive expertise, so the newcomer can hold its own on the rough stuff. But few owners are likely to get their Koleos dirty mud plugging.

Instead kerbside appeal and on-road performance are the most important factors in this sector. Sadly, when it comes to style the Renault struggles to make an impact.

You do get chunky body mouldings, roof rails and Renault’s corporate front-end but the end result lacks any visual flair.

At the back there’s a useful split-opening two-piece bootlid, which offers good access in confined spaces. It reveals a decent 450-litre luggage space which increases to 1,380-litres if fold the rear seats flat.

Up front, the cabin features smart materials but the bland dashboard layout is disappointing. There is plenty of room though, and flagship Privilege trim provides leather upholstery, integrated sat-nav and a BOSE stereo.

Two diesel engines will be available when the Koleos goes on sale this summer, both of them 2.0-litre diesels. The entry-level 148bhp unit returns 38.2mpg and 197g/km, but we tried the flagship 178bhp powerplant. It can sprint from 0-62mph in 9.9 seconds and can return 35.8mpg and CO2 emissions of 209g/km.

On road, the Koleos is set up for comfort and refinement rather than pin-sharp handling and the soft suspension soaks up bumps and ruts - even on rocky off-road tracks.

At £24,695 the top of the range Koleos isn’t cheap but the less powerful diesel will save you £1,200 and there’s even the option of a cheaper two-wheel drive variant. It starts from £17,995 and will be the most sensible option for many buyers.

Rival: Ford Kuga The new Ford is stylish, great to drive and competitively priced, making it the SUV to beat. Affordable running costs and a strong diesel engine also boost its appeal.