The Koleos Initiale Paris is Renault's range-topping SUV, but it fails to offer enough to justify its high price tag... 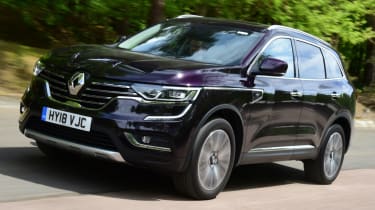 Renault’s approach to luxury with the Koleos Initiale Paris has failed to hit the spot. While it offers stylish looks inside and out and plenty of passenger space, the majority of rivals deliver a more rounded driving experience. The Koleos makes sense in lower trim levels where equipment levels remain generous, but the Initiale Paris lacks anything truly unique to justify its sky-high asking price.

Renault often avoids the well-trodden path when it comes to flagship cars. The Vel Satis from the early 2000s took a unique approach to luxury, but those quirky catwalk looks proved a little too much for UK buyers; just 1,400 models found homes in three years.

So Renault has shaken things up with its latest range-topper: the Koleos Initiale Paris. It’s a new trim to British buyers, but has been tried and tested in Europe on the not-for-UK Espace MPV. All of that car’s French haute-couture has been squeezed into the high-street style of a mid-size SUV. But has it worked?

It certainly makes a solid first impression. The Koleos looks smart, especially when paired with the classy ‘Amethyst’ paint job and 19-inch alloy wheels of our test car. It’s great inside, too. The seats – heated all-round and cooled up front – are trimmed in Nappa leather and feel wonderfully supportive. The way the upholstery blends from cream into black won’t be to everyone’s taste, but an all-black alternative is available.

Equipment levels are excellent. All Initiale Paris cars get a panoramic sunroof, LED headlights, a BOSE sound system, and a reversing camera. Renault's 8.7-inch ‘R-Link’ infotainment system works well, and the big menu icons are easy to use. However, the portrait orientation of the display is at odds with the layout of the Android Auto and Apple CarPlay systems, making their displays irritatingly small.

The Koleos fares well from a practicality standpoint, too. Huge door bins and a deep central cubby offer plenty of cabin storage, and back seat passengers are treated to lots of legroom. However, the panoramic roof does compromise rear headroom a little. The 565-litre boot is generous, but it’s put in the shade by the Skoda Kodiaq, which offers 630 litres and a couple of extra seats. 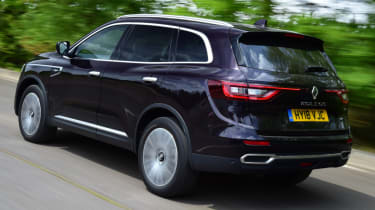 Out on the road, the Koleos continues to fall away from its rivals. Around town those 19-inch wheels crash into potholes and bumps, and even at motorway speeds it never fully settles. Push the Koleos into a corner and there’s more body roll than you might expect, though the steering is accurate enough. The Kodiaq feels more secure, and a DS 7 Crossback rides more smoothly.

There’s only one engine available for the Initiale Paris. The 175bhp 2.0-litre turbodiesel is always conspicuous, droning loudly even under gentle throttle loads. The automatic gearbox can be slow to respond when moving from a standstill, too, which isn’t ideal if you want to pull out of a junction in a hurry. Once up to speed, however, the seven-speed unit shifts smoothly and makes the most of the engine’s 380Nm of torque.

However, the main stumbling block for the Koleos Initiale Paris is the price. At £37,030, the top-spec Koleos goes up against a Volvo XC60 and a DS 7 Crossback – both of which are both more comfortable and feel more special. If a capable family SUV is more important than upmarket trinkets and exclusivity, then both the Kodiaq and Peugeot 5008 are more compelling all-rounders. 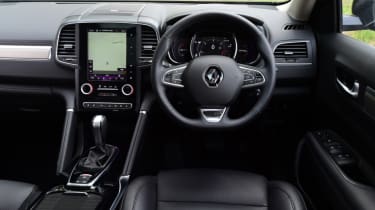 As such, our pick of the Koleos range remains the Dynamique S Nav dCi 130. At £28,045, it’s almost £9,000 cheaper than the Initiale Paris, so on a typical PCP deal it’ll cost significantly less per month. Even in identical dCi 175 AWD X-Tronic guise it’s almost £5,000 less than our range-topping test car.