These days it seems turning up on the school run in anything but an SUV, a compact MPV or a people carrier will leave you the odd-one out. 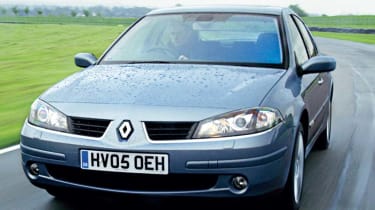 With sleek styling, more quality and a punchy new flagship, the Laguna has more to offer than ever. The high-performance GT is fast and comfortable, and while rivals deliver more thrilling handling, it's priced competitively and is superbly equipped. But it loses value as quickly as class rivals, so expect big depreciation to hit flagships.

These days it seems turning up on the school run in anything but an SUV, a compact MPV or a people carrier will leave you the odd-one out.

Opting for the unconventional may seem an obvious choice, but Renault wants to bring families back down to earth with its facelifted Laguna. We got behind the wheel of one of the first right-hand-drive models to cross the Channel to see if it can attract buyers back to the traditional family car.

The first challenge was for designers to give the over-familiar Laguna a fresh face. Most of the changes were made ahead of the windscreen, with revised front lights and a new grille. At the rear, fresh lamp clusters have been added, but it is from the back that the Renault now looks old-fashioned and conservative - especially lined up next to the company's M�gane or Modus.

Our test car was the sportiest model in the revised Laguna line-up - the GT. With a 10mm lower ride height, 17-inch alloy wheels and a boot spoiler, the flagship has a visual edge over its stablemates. But it is under the bonnet that the GT holds its trump card.

Renault has developed a 202bhp version of its 2.0-litre turbo petrol unit, which uses 300Nm of torque to propel the Laguna from 0-62mph in only 7.2 seconds. While the coarse engine note penetrates the cabin, the punchy performance on offer is very impressive. The standard-fit six-speed manual gear- box allows the driver to get the best from the engine, with a positive action and accurate clutch pedal.

Few buyers will need more acceleration, but the GT's handling could prove disappointing. While the firm set-up minimises body roll and there is no shortage of grip, the Laguna is not an involving car through challenging corners. The upside is that even the sporty version is extremely comfortable and offers a smooth ride. Inside, Renault has acted on criticism of the outgoing model and improved the quality of the materials in the redesigned cabin. A new-look dash with revised dials brings the hatch up to date, while build quality appears excellent - only time will tell if long-term reliability and durability is now better.

The Laguna gets leather-trimmed seats and lots of kit as standard, and range-topping models have a luxurious feel inside. It might not improve your image, but Renault's fresh-faced new model makes fine family transport.