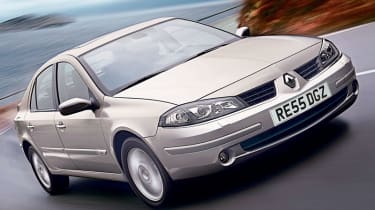 The all-new diesel gives the Laguna extra appeal, with improved economy and emissions over the old 2.2 dCi - all for an extra £200. Buyers who put driving involvement ahead of comfort will still have to look elsewhere, but plenty don't. If you're one of them, the engine, at least, is near the top of the class.

Renault knows this only too well, and so has just updated its diesel line-up with a series of new powerplants that meet tough Euro IV emissions regulations. Among the revised units is an all-new 2.0 dCi, which debuts in the facelifted Laguna. It will also appear in other Renaults in the range, but for now it's only available in the family car.

Designed to replace the existing 2.2-litre dCi, the direct-injection unit produces 150bhp - the same as the engine it supersedes. However, fuel economy is boosted from 43.4mpg to 48.7mpg, while CO2 emissions fall from 174g/km to an impressive 154g/km.

Cutting-edge technology means it doesn't need a particulate filter to achieve this, although the more powerful 175bhp version - due early next year - will be fitted with one.

Diesel clatter is minimal on start-up, but under acceleration at low speeds, the new engine can be vocal. That said, at motorway pace it offers impressive refinement, with wind noise from around the A-pillar the main distraction.

The 0-60mph sprint takes 8.9 seconds and the engine's 340Nm of torque ensures overtaking is easy and relaxed, although it's at its best after 2,000rpm. The light weight of the unit also helps improve handling and grip is good, even if there's excessive body roll during swift direction changes. As ever, the Laguna is primarily about ride comfort. Strong brakes and a six-speed manual gearbox complete the package.

Meanwhile, the old 2.2 dCi will continue into 2006, mated to an automatic gearbox - the only diesel option with two pedals. We also tested the revised 130bhp 1.9 dCi, which doesn't have the same mid-range performance as the 2.0-litre, but offers high-speed refinement and merits attention as a value-for-money alternative.

Speed merchants will have to wait for the 175bhp version of the new 2.0-litre engine, but the strong 150bhp unit is a fine choice and on sale now.