The new Renault Laguna is now available in the UK, but does it have what it takes to compete in this ultra-competitive class? 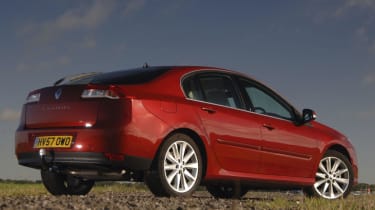 Disappointing to drive, comparatively expensive and slower in-gear than its power figures suggest, we think the Laguna has work to do if it’s to win the hearts and minds of family car buyers tempted by smaller executive rivals. The quality of the cabin is admirable and the front seats comfortable, while the refined 2.0-litre diesel returns nearly 50mpg. But that’s simply not enough for the new Renault to be a top contender.

The reinvention of the family car mar­ket is almost complete... And with new versions of the Citroen C5, Ford Mondeo and Mazda 6 all hitting Britain’s roads in quick succession, the whole process has been as rapid as it is dramatic.

That change has left buyers with a far more diverse choice of cars than before. The Mondeo, for example, is a vast machine, and probably owes as much to the likes of the old Gran­ada as it does its predecessor. The 6, on the other hand, feels a lot more compact, chasing those tempted by the likes of the BMW 3-Series.

So where does the new Renault Laguna fit in now that it has arrived in the UK? We drove a 2.0-litre diesel-engined model to find out.

From the driver’s seat, early impressions are promising. The cabin is clearly laid out and the car rides well, dealing with uneven surfaces capably. It’s more luxurious and refined than before, and there is little in the way of engine noise, even under full throttle.

We were less than impressed by the steering, however. It not only lacked feel, but was also imprecise. When changing direction quickly, the Laguna proved clumsy – a surprise given the composed ride. Thankfully, the brakes are far better, bringing the car to a halt quickly and without fuss. Our Dynamic S was fuel efficient as well, returning 47.1mpg and producing 158g/km of CO2.

Nevertheless, we can’t see the new Laguna making a big impression on this ultra-competitive class – not least because of its poor handling.

Rival: new Citroen C5 Stylish, spacious and beautifully built, the new C5 is set to change the status of the Citroen brand in the UK when it goes on sale in the spring. Diesel engines look promising, and with a choice of steel and hydractive suspension, the car will be well equipped, too.