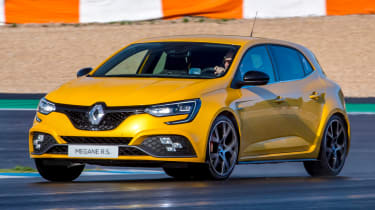 The Renaultsport Megane Trophy is an even faster real world machine than the Cup chassis-equipped 280, while the upgraded brakes and Bridgestone rubber are welcome additions, too. And with an estimated price of £32,000, it’s likely to cost just £1,000 more than an RS 280 Cup with the bigger wheels and brakes. That said, it doesn’t feel as focused and exciting as previous Trophy models, plus it’s still not as engaging and well-rounded as the Honda Civic Type-R

Traditionally some of the fastest Renault hot hatches have been handed the hallowed Trophy badge, so there’s no prizes for guessing what the latest go-faster Megane is called.

Based on the recently introduced RS 280 Cup model, the RS 300 Trophy is the most powerful Renaultsport model ever and has the brilliant Honda Civic Type-R in its sights. Promising greater straight line pace and even sharper handling, the newcomer aims to build on the considerable promise of standard car, which is fast and agile, but features the firm’s flawed 4CONTROL four-wheel steering. So has Renault succeeded in creating the ultimate pocket rocket? We’ve hit the road and track to find out.

Externally, the newcomer is identified by a large Trophy graphic on the ‘F1-style blade’ in the front bumper, plus the new 19-inch Jerez tri-tone alloy wheels. There’s also the option of lighter ‘Fuji’ rims, which slash 2kg per corner and can be had with track-focused Bridgestone Potenza S007 rubber. Inside there’s a pair of high-backed Recaros that sit up to 20mm lower than the standard seats. 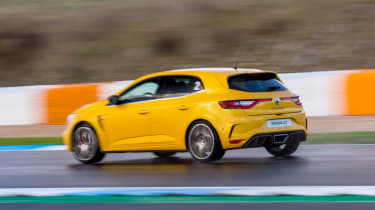 Under the skin, the 1.8-litre four-cylinder gets tweaked electronics, plus a turbocharger that’s fitted with ceramic bearings to cope with its greater workloads. There’s also a freer breathing exhaust with an adaptive valve that gives a sportier sound when opened. Power is up by 20bhp to 296bhp, while torque swells from 390Nm to 400Nm (420Nm on cars fitted with the EDC twin-clutch box).

You can feel the extra performance immediately. Renault claims it’s chipped a tenth of second from the 0-62mph, which now stands at 5.7 seconds, but it’s the greater mid-range muscle you appreciate the most. There’s virtually no lag; the Megane pulls with a relentless, deep chested urge from as little as 1,600rpm.

It sounds good too, especially with the valve in the exhaust open. There’s low-rev rortiness that’s absent from the standard version, while lifting the throttle results in some attention-grabbing pops and bangs from the tailpipe.

As before the six-speed manual is the pick of the transmissions. Its shift action is notchy, but it adds an extra layer involvement that’s lacking with the slightly slow-witted EDC.

Detecting differences in the Trophy’s handling is more difficult, largely because it uses an identical four-wheel steering set-up as the standard car, plus the same suspension and limited-slip differential as the optional Cup upgrade available on the 280. That said, you do get Renault’s bi-material front brake discs, which  combine cast iron and aluminium to reduce unsprung weight by nearly four kilograms. They offer greater resistance to fade and have a nicely weighted pedal action.

The rest of the car feels more less the same as the 280 Cup. At low speeds there’s still that sensation the rear wheels are turning a fraction of a second after the fronts, a feeling that’s amplified in quick direction changes. Matters improve the faster you go, when the rear wheels turn in the same direction as the front pair. 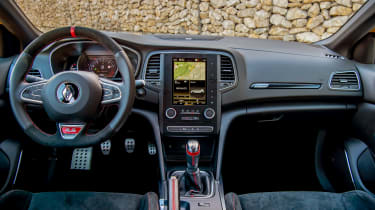 Race mode is arguably the best (there’s also Normal, Sport and Perso, which allows you to mix and match settings) as it quickens the 4CONTROL’s responses and sharpens the throttle.

At first the Megane feels nervy as you turn into a corner, forcing you to be calmer and more precise with your inputs. But you quickly get used to it and the Renault scythes through corners with uncanny speed, precision and agility. It’s not as engaging as a Honda Civic Type R, but it’s incredibly quick and composed; the limpet-like grip combining with cast iron body control from the passive dampers with their clever hydraulic bumpstops. 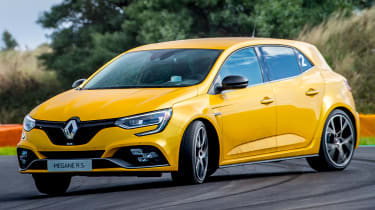 The RS is a particularly quick and on track, lapping up hard work with poise and enthusiasm, although it can snap sideways in wet conditions when the ESP is disabled.

The trade-off for this sharp handling (and a lack of adaptive dampers) is a firm ride. Plus there’s still some torque steer out of slower corners.

The rest of the Trophy is pure Megane, meaning it’s reasonably roomy and refined, well equipped and nearly matches German rivals for premium appeal. And while official figure have yet to be released, the Renault should be cost effective to run.