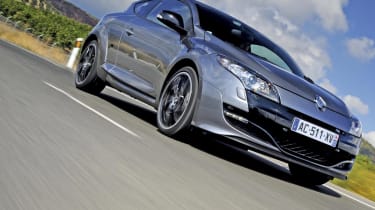 As Renault has used the Mégane Coupé as a starting point, the 250 isn’t the most practical car on the market. But for most buyers, this will be of little importance. The balance the newcomer strikes between fast and involving performance and day-to-day comfort is superb. We drove the standard model, which is well equipped, reasonably priced and looks the part inside and out. A 0-62mph time of 6.1 seconds is also hot on the heels of the Focus RS. The more basic and stiffer Cup version caters for hardcore drivers, so Renault has all bases covered – and this Mégane should be on every hot hatch fan’s wish list.

Stand well back – it’s the latest firecracker from France! The new Renaultsport Mégane 250 is the firm’s blazing response to the growing band of hot hatches hitting the market – and it’s certainly packing enough heat to frighten its rivals.

The company systematically improved the previous generation over the course of its five-year existence – culminating in the extreme, stripped-out R26.R version, which replaced the back seats with a roll cage and the glass rear screen with a sheet of plastic. Practical it wasn’t, but the swansong of the range was one of the best drivers’ cars money could buy.

This newcomer is nowhere near as radical as that, yet the look is still very striking. It takes the Mégane Coupé as a base, and the rakish shell is transformed with performance cues such as flared wheelarches, side skirts, an F1-style front ‘blade’ and a huge central tailpipe that sits inside an aerodynamic air diffuser. The styling is completed by 18-inch alloys as standard, or buyers can specify the polished 19-inch rims finished in black and silver, as shown here.

Inside, it’s not so dramatic, although there’s a distinctly yellow theme: the rev counter, seatbelts, steering wheel and gearlever stitching, plus some of the trim on the leather seats, are all a shade of lemon. But otherwise, it’s standard Mégane Coupé fare, and can’t match the exterior’s visual impact.

However, under the bonnet, it’s definitely not short on punch. The 2.0-litre turbocharged engine is a heavily revised version of the unit found in the previous car, boosted to give a mighty 247bhp and 340Nm of pulling power. It’s not the most tuneful four-cylinder in the world – despite whooshing loudly at high revs – but makes up for this with potent acceleration.

Power delivery is strong from as low as 1,500rpm, and never lets up until the needle hits the red line. The Renault sprints from 0-62mph in only 6.1 seconds, and even though all that grunt is transmitted through the front wheels, there’s no grappling with torque steer to keep the car in a straight line – it piles on the speed with remarkable composure.

The traction control has three modes, with the middle Sport setting (between on and off) dialling down the interference of the electronic safety systems without turning them off fully. Sport and off modes also sharpen throttle response and increase engine noise in the cabin, for a more intense hot hatch experience.

This standard version of the Renaultsport Mégane has clearly been built with day-to-day usability in mind, though, so the suspension is set up to be comfortable and supple on rough roads. At the same time, it enjoys corners. The ride is beautifully balanced, body roll is kept to a minimum, the steering is weighty and precise, and there’s plenty of grip available. In other words, the compromise between comfort and agility is superbly judged.

Yet buyers who want something a little bit rawer needn’t worry. A more track-focused Cup version hits showrooms at the same time as this standard car. The Cup brings stiffened suspension, a limited slip differential for less wheel spin and dispenses with some of the regular Renaultsport’s luxury kit. It also swaps the standard front seats for a pair of deep Recaro buckets – plus it weighs in at £1,000 less.

However, if you want the best of both worlds, the Cup suspension, limited-slip diff and more supportive seats can be specified on the standard Mégane 250 for an extra £2,000.