We say goodbye to our capable compact diesel estate 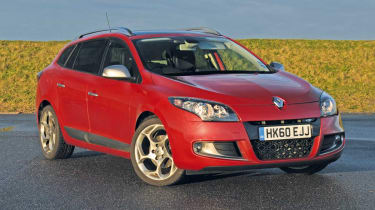 6
It's often said that variety is the spice of life – and that’s certainly been the case for our Renault Megane Sport Tourer.
In 12 months of hard motoring, it has seen service as a golf buggy, pounded around a race track in the company of stripped-out hot hatches and been a relaxing home-from-home on my 200-mile round-trip commute from Bournemouth, Dorset, to London.
As a result of its rich and varied lifestyle, the Renault has racked up an amazing 43,670 miles in just under a year, which is around four times the UK annual average. Such a high mileage is a stern test for any car, so it was sure to expose any flaws or weaknesses in the Megane. And the good news is that the Sport Tourer has emerged from its 12-month stint with an almost-perfect record.
It only let me down once, when an air block in the fuel system left me stranded on Christmas Day last year. Luckily, Renault Assist was quickly on the scene and the car was back on the road before I’d even digested my turkey and Christmas pudding. Apart from this small glitch, the Megane has proved to be a remarkably robust and trouble-free companion.

Some of the materials in the cabin are starting to look a little grubby and there’s an occasional squeak or rattle, but all the gadgets still work perfectly and nothing has actually fallen off.
This is particularly impressive when you consider the extremely stiff suspension that comes as standard on our racy GT Line model. Some colleagues have complained that it makes the Megane uncomfortable, but I’ve grown used to it.
And the pay-off for this bone-jarring ride is hot hatch agility through corners. In fact, it’s so good to drive that I had no hesitation taking it to one of Renault UK’s track day events, at Silverstone, Northants.
Despite its humble estate car status the grippy and composed Sport Tourer effortlessly mixed it with hardcore Renaultsport Clio and Megane hot hatches on the ultra-fast circuit.
Adding further to its high-performance appeal is the 158bhp 2.0-litre diesel engine, which is surprisingly quick off the mark and delivers plenty of overtaking punch.
Unfortunately, by exploiting its performance, I’ve returned a distinctly average 36.6mpg fuel economy over the course of the year. Yet driven sensibly, the Megane is exceptionally frugal. In our money-saving special, it achieved an impressive 47.7mpg.
When it hasn’t been pounding around race tracks or taking part in economy runs, the car has simply got on with the job of being brilliant everyday transport. The well shaped 491-litre boot swallows all of my camera gear with room to spare, the excellent TomTom sat-nav means I never get lost and the heavily bolstered sports seats are extremely supportive.
While I enjoyed my short stint in fellow snapper Pete Gibson’s Kia Sportage, I couldn’t wait to get back behind the wheel of my Sport Tourer.

“The Megane looks great, goes well and has a spacious cabin. Plus, it comes with loads of kit. However, there’s no excuse for the car’s rock-hard ride.”James Disdale, Deputy road test editor

“It’s a shame that the Renault is often overlooked by buyers. Sleek styling, attractive prices and smooth diesels make it more interesting than the dull VW Golf.”Monk_76, via www.autoexpress.co.uk