Can the Renault Megane Sport Tourer estate add extra practicality to the strong all-round qualities of its hatchback sibling? 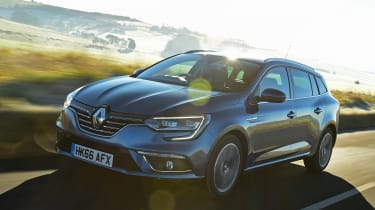 The Renault Megane Sport Tourer is handsome and good to drive, while this dCi 130 model manages impressive economy as well. The interior is a plush and comfortable place to spend time, and the compliant ride means it makes a great case as an all-round family car. It's not quite as spacious as its main rivals, though, which could be key for many buyers.

We've already been impressed by the new Renault Megane hatch, with the latest model being one of our favourite family hatchbacks on the market. Now, there's a much more practical Sport Tourer estate version, and we've tested it in the UK for the first time.

It's available with a range of petrol and diesel engines from launch, including the warmed-up GT version that's been tweaked by Renault Sport, but here we've tried the much more sensible 1.6-litre diesel with 128bhp. It's the one many buyers will go for, and it's easy to see why: the 70.6mpg combined economy figure is impressive, as are emissions of just 104g/km.

The 1.6-litre diesel is punchy too, with the 320Nm of torque coming in low enough in the rev range that it's a relaxing car to drive. It's a bit rattly, like most four-cylinder diesels, but that's the only real criticism as it has plenty of shove and settles down nicely at a cruise. 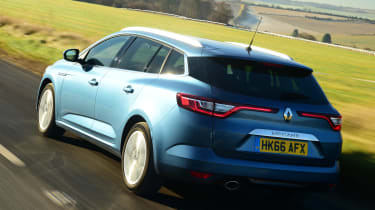 The six-speed manual gearbox isn't as slick as transmissions in rivals such as the SEAT Leon ST or Skoda Octavia Estate, but it's still easy enough to use and the clutch pedal isn't too heavy either.

Light steering that's a bit numb around the centre takes the edge off the driving experience, and the chassis isn't quite as composed as the Ford Focus Estate in corners, but overall the Megane is setup to deliver a safe and composed drive, which it does excellently.  The driving modes mean you can choose the weight of the steering, but it's not a huge change and the normal mode is probably fine for all types of driving.

What will matter for many more is the ride, and on a mix of UK roads we found the Megane to be pretty comfortable. The driving position and plush seats mean it's comfy to sit in and find an ideal driving position, but the chassis is also definitely up to par with other cars in its class for comfort.

The cabin plays a big part in that too, as it feels much more upmarket inside than the old Megane. You get a portrait-oriented touchscreen on higher-spec cars like our Dynamique S, which dominates the dashboard. The screen could be more responsive, but it looks good and has a wealth of customisable features that makes it feel right up to date. The whole dash, in fact, is excellent and we'd consider it one of the best interiors in its class.

Good quality materials are used throughout the cabin, and while there are some harder materials in places it's really not a concern for a family estate like this. There’s plenty of space upfront and in the back in the back, while leg and headroom are generous throughout.

The really important thing about this car is the boot, though, and at 521 litres, it's significantly bigger than the 384-litre load bay in the Megane hatchback. It can't quite match the 587-litre space in the SEAT Leon ST, though, and the Octavia Estate beats both with 610 litres. It might have a pretty face, but the Megane does lack a little when it comes to carrying capacity. 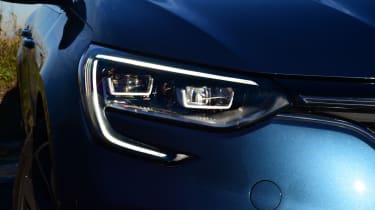 But we suspect many buyers will be interested in the Megane Sport Tourer for that reason: it's certainly up there with the best-looking family estates. The stylish headlights and taillights add some drama to both ends of the car, while the grille and oversized Renault badge mean the front-end is particularly distinctive.

That's not to say the Sport Tourer isn't a practical car, though, as the boot is easy enough to access and the seats fold down easily into a completely flat load bay. Sliding in longer items is made easier still by the low loading lip, too. Still, if it's space you need over anything else then you'll have to look elsewhere: even fully-folded, the Renault’s 1,504-litre space isn't a match for the Skoda's 1,740-litre bay 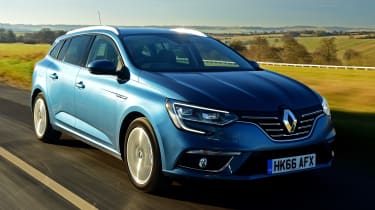 With Renault's four-year warranty (100,000 miles), a five-star safety rating from Euro NCAP and tech such as adaptive cruise control and hands-free parking on the options list, there are plenty of reasons why the Renault is well worth a look, though.