Renault hopes to break the mould with its Modus 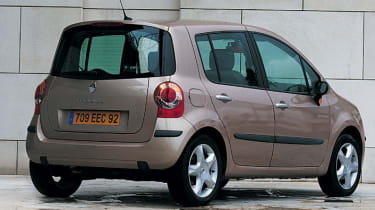 Renault's first attempt at combining small-car style with big-car practicality is a great choice for family buyers who want a workhorse with character. The Modus comes to the market as Europe's safest supermini and is the first model in its class to gain a five-star Euro NCAP crash test rating. Add competitive pricing, and success seems assured.

Renault has a long history of opening up new market niches and developing innovative ideas. It broke the mould with the Espace, again with the Scenic - and it's hoping for a hat-trick with the Modus, which is said to combine people carrier flexibility with Clio-style chic and flair.

But will the all-new mini-MPV be as successful as its illustrious predecessors - or is it set to sink without trace like the ill-fated Avantime coupe/MPV?

The Modus certainly starts promisingly. It resembles a shrunken Espace, as you would expect from a Renault supermini/MPV crossover. In contrast to the clumsiness which is associated with some models in this class, such as the Toyota Yaris Verso, the front has a friendly shape. The large, circular rear lights won't be to everyone's taste, but nothing about the car is offensive.

And it's certainly versatile. There's a sliding back seat, while the bench can be split to accommodate two or three adults. In its furthest rearward position, occupants actually have more legroom than in the far larger Vel Satis executive car. Meanwhile, at the other extreme, the unit folds into the rear footwell to give a completely flat load space.

The Modus is clearly aimed at the family market, emphasised by the tiny mirror above the traditional rear view glass, designed to let parents keep an eye on their offspring in the back. The rest of the environment is similarly caring and sharing. High-quality soft-touch plastics are used, the centre console is minimalist yet functional and there's a wide, MPV-style dash. The light, clean and airy cabin will be further enhanced if you opt for the full-length sunroof.

There are loads of storage nooks and crannies, while the front passenger's seatbase lifts to provide a cubby for the driver's bits and pieces. Other neat touches include the 'boot chute' - for putting small items into the rear without opening the tailgate - and the bike rack that fixes to mounting points beneath the bumper. The only major drawback we found was that with the seats folded into the rear footwell, the front chairs have to be so far forward that tall drivers may feel cramped.

Three petrol and two diesel engines will be offered at launch. Our car was fitted with the 80bhp 1.5-litre oil-burner, which was clatter-free and surprisingly quiet and refined at speed. This, combined with incredibly efficient damping from the Megane-sourced suspension, gives the Modus a comfortable, big-car feel over bumpy surfaces and ensures it cruises quietly on motorways.

Although the new car has a slightly higher driving position than that of the Clio, you feel more as if you're sitting in a supermini than a van. And while the Modus won't win friends among keen drivers, it's a more than capable performer on twisty sections of B-road.

However, that's not the point of this model. Renault expects its latest offering to find favour with potential Clio buyers who are after a little more space and versatility - and it's hard not to imagine the Modus appealing to that niche.