Every so often, a car comes along that redefines people's expectations. The Modus is billed as such a model - and it's one that UK buyers are bound to get excited about. 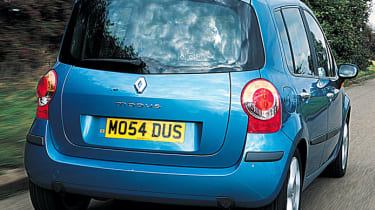 The Modus is one of the best new cars we've driven this year. It offers all the practicality and comfort of a large family saloon, within a package only marginally bigger than a Clio. Add in admirable driving dynamics, a good engine range, keen pricing and generous equipment levels, and Renault's newcomer looks very hard to beat indeed.

Every so often, a car comes along that redefines people's expectations. The Modus is billed as such a model - and it's one that UK buyers are bound to get excited about.

The newcomer builds on Renault's reputation for making the most of interior space, and brings Espace levels of cabin flexibility to a package no bigger than a supermini. We sampled the first right-hand-drive model to arrive in the UK - and can confirm that it's one of the cleverest, best designed and most keenly priced new cars on the market.

Why is it so impressive? Well, for starters, it represents superb value for money. The 1.4-litre Dynamique A/C driven here features air-conditioning, a CD player, alloy wheels, front foglamps and six airbags, plus traction control and electronic brakeforce distribution - yet costs only £11,000.

And that's an impressive price, because although it might not look like a particularly big car, the Modus has more usable cabin space than many luxury saloons. There is room for five adults to travel in comfort, with acres of headroom and a good-sized boot. It's also practical, thanks to large door pockets, a huge glovebox and a dash-top storage box.

If you need even more room in the front, the base of the passenger chair tips forwards to reveal further storage space, while the boot is reasonably generous even with the back seats up. We're also fans of Renault's 'boot chute', where the lower portion of the tailgate can be tilted down to allow access to the luggage area without lifting the whole lid - ideal in tight spaces.

In the back, the Modus gets the firm's 'Triptic' seat mechanism, which lets the rear bench slide forward or backward, or tip to give an entirely flat load area. While in space terms it's very generous, the mechanism is frustrating to use, as the chair can be tilted all the way only if you slide it for- ward first to expose the levers. The seat unit is also rather heavy, and moving it on your own is cumbersome.

Apart from that, though, the Modus is a highly impressive package, and the 1.4-litre petrol model is expected to be the UK's biggest-selling variant. It offers impressive performance given the car's size and engine capacity, and is surprisingly refined.

Motorway cruising is fairly relaxed, while on country lanes the chassis feels responsive and well balanced despite the lofty driving position. Furthermore, the Modus benefits from a five-star Euro NCAP crash test rating, making it an even more attractive proposition for families. It promises low running costs, too, with group 3 insurance and combined fuel economy of more than 42mpg.

The Modus, then, is the concept of the supermini-MPV almost perfectly executed - once again, Renault has created a car others are bound to follow. P38: Renault Scenic tested