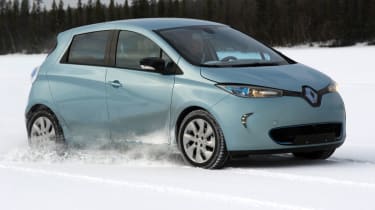 It’s impossible to deliver a definitive verdict on how the Zoe drives under such specific conditions, but the early signs are impressive. Not only is it the most affordable electric car, but it’s also practical (with a huge 338-litre boot) simple to use and attractive. It forces less compromises from the driver than any other electric car, the Leaf included, but its success hangs on whether customers can live with the limited range.

Advertisement - Article continues below
Normally, driving an electric car across a frozen lake wouldn’t be the smartest idea, but these aren’t normal circumstances. We’re North of the Artic circle, near the town of Kiruna, Sweden, to join Renault’s development team and experience cold-weather testing in pre-production versions of the Zoe supermini – which you’ll be able to buy in October.
The Zoe is the fourth electric Renault to arrive – following the Kangoo Z.E. van, Fluence and Twizy – but it’s by far the most significant. Although it resembles a more futuristic version of the Clio, it’s been designed from the ground up to be an electric car, and claims a fistful of world firsts.
Advertisement
Advertisement - Article continues below

Firstly, there’s the £13,650 price tag (£12,340 less than the Nissan Leaf), which is barely more than a diesel Clio and the lowest of any mass-production electric car. There’s a catch of course – you have to lease the batteries for a minimum of £70 a month, but that does include a full recovery service, which includes being rescued when your battery runs flat.
Advertisement - Article continues below
It’s also the first EV to feature a ‘Chameleon’ charger, which accepts any level of power input – so charging takes anywhere between 30 minutes from a industrial-spec fast charger to nine hours from a household socket. And then there’s the range – 130 miles under optimum conditions – although Renault admits it’s closer to 90 miles around town and 60 miles in the cold weather conditions we experienced in Sweden...
Power comes from an 88bhp electric motor – 20bhp less than the Leaf – mounted on the front axle, and from behind the wheel the experience is as serene as we’ve come expect. We were only allowed a few kilometres of driving on compacted snow and with winter tyres instead of the specially-designed low-resistance Michelins that production cars will get, but first impressions are good.
Advertisement
Advertisement - Article continues below
Because the batteries are mounted under the floor, and in the middle of the car, stability is excellent and body roll minimal. The forgiving suspension deals well with rutted snow – so we can assume the Zoe will be every bit at relaxing to drive around town as the Leaf. As for the acceleration and braking performance, it’s difficult to learn huge amounts with a vast white backdrop and no reference points – but let’s just say that the Zoe will feel comfortably quicker on the road than its 0-62mph time of 13.5 seconds suggests.
Advertisement - Article continues below
Up close, the Zoe is an attractive piece of design. The full-width grille and LED running lights are a fresh interpretation of the new family face, while the hidden rear door handles are a nice touch – giving it the look of a three-door at a glance.
On the inside, the Zoe feels firmly from the future. Push the starter button, and you’re greeted by a series of sci-fi sound effects. The R-Link central screen handles everything from sat-nav to the stereo controls, while the simple TFT instrument panel tells you your speed and whether you're sapping power from the batteries or feeding it back to them. This is done via the intelligent regenerative braking system, which increases its force depending on how hard you push the brake pedal.
Renault expects to sell tens of thousands of Zoes each year, and will build them on the same production line as the new Clio 4. It's easy to see why Renault is so confident. Electric charging infrastructure is growing by the day, and the Zoe is the best-priced, most attractive and easy to use electric car to date.
Advertisement
Share this on TwitterShare this on FacebookEmail
Advertisement