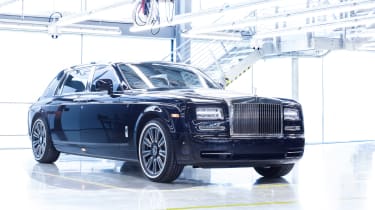 Rolls Royce has revealed pictures of the final Phantom VII to roll off the production line at Goodwood. The car is a one-off, long wheelbase special commissioned by a renowned Rolls Royce collector.

The last Phantom VII supposedly takes on a nautical theme and features individual design choices intended to evoke a 1930’s ocean liner. It sits on an extended wheelbase body measuring 6,092mm long – 250mm longer than that of the already huge standard Phantom.

The deep blue paint job with silver pinstripes and a solid silver Spirit of Ecstasy is matched by a powder blue leather interior featuring embroidered wave patters in the upholstery. Even the lambswool carpets get the ocean liner inspired treatment, and feature a hand-cut wake effect. 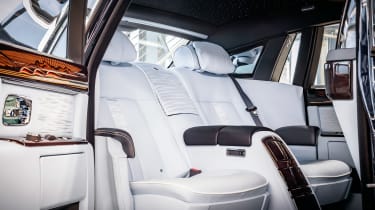 Elsewhere in the cabin, a sculpted art deco wooden veneers depicting ships and waves are found and even the clocks in the cockpit and partition wall have been styled to look like the radio clocks found on the grand ocean liners of the time, with 24 hour rotatable bezels representing 24 time zones.

No powertrain changes have been revealed, but it’s safe to assume that the final Phantom VII has the same 454bhp 6.75-litre V12 engine. Rolls Royce hasn’t revealed how much the special customer has paid for the car, but it should be plenty more than the £373,824 price tag of a standard Extended Wheelbase Phantom. 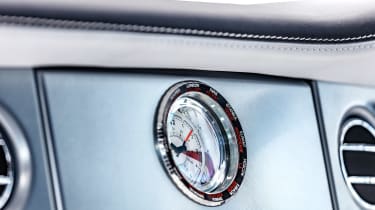 The car marks the end of 13 years of Phantom VII production though, Rolls Royce has confirmed a new version with a lighter aluminium platform is in the pipeline alongside the firm's first SUV - the Cullinan.

Is the Phantom VII one of the most iconic luxury cars of all time? Tell us your favourites in the comments. 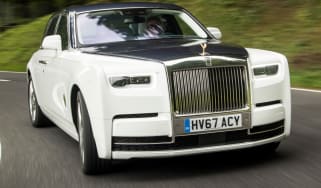