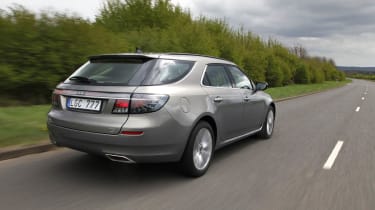 Judging from our experience of the firm’s development models, the new Saab 9-5 SportWagon bodes well for the brand. It promises to drive just as well as its four-door stablemate and add a welcome dose of practicality to the executive car class. If Saab’s engineers can reach their goals of improving comfort without sacrificing its tidy handling the Saab 9-5 SportWagon promises to be a credible alternative for buyers who don’t want one of the obvious executive estate car options.

The Saab 9-5 got off to something of a false start here in the UK. The ride comfort of the first test cars was criticised, and it was only available in saloon guise. As Saab expects the estate version to account for the lion’s share of sales, the 9-5 has always been fighting with the equivalent of one arm behind its back...
Help is at hand, though, because the firm is busy fine-tuning the new SportWagon, which is due to hit showrooms in September, and Auto Express was invited along for an early drive. Saab engineers have been in the UK finalising the chassis settings for the new car and we joined them for a day to see how things are coming along.

The first thing to strike you about the newcomer is how compact it looks. The well-proportioned Saab 9-5 SportWagon appears much smaller on the road than the figures suggest. Only when you get close, or see it parked alongside another car, do its mammoth dimensions become obvious.
The load lugger will command a £1,200 premium over the four-door model and Saab’s designers have done a decent job of integrating its extended roofline. So while the front will be familiar to 9-5 saloon owners, it’s all change at the back. Here the tapered tailgate and wraparound-style windows owe more to the latest generation of sport tourers, rather than traditional boxy Scandinavian estates.
Despite its fashionable looks, the SportWagon is still a practical choice. Bootspace measures in at 527-litre with the 60/40 split folding rear seats in place, but drop them flat and this extends to 1,600 litres. It’s not the biggest in its class, but its low loading height and conveniently shaped load area won’t disappoint. All SportWagons also feature the firm’s clever load restraining system. It features a moveable divider, which slots into a U-shaped track on the bootfloor to secure smaller items.
We tested both the 188bhp 2.0-litre TTiD and 158bhp TiD diesel engines. The former was also fitted with Saab’s adjustable DriveSense set-up, which provides fine-tuning for six parameters ranging from the throttle response and steering weighting, to the suspension settings and engine management.
However, cars with the lesser engine, and without the trick software, are expected to account for up to 60 per cent of sales. The gruff engine delivers gutsy performance and combines well with the firm’s latest six-speed automatic gearbox, with well-timed and smooth shifts.
On twisty and bumpy backroads it also displays decent composure and body roll is well controlled in corners. However, while comfort is improved over the first Saab 9-5 saloons to hit the UK, it still struggles to take the edge off the kind of small imperfections and ridges that are a constant feature of UK roads. The good news for prospective buyers is that Saab’s development engineers know this, and the final suspension settings should bring about further improvements…
Rival: Audi A6 Avant
The new A6 saloon has just arrived and the Avant estate will provide the Saab with a tough rival. Its efficient engines, desirable image and classy interior will set it apart from its Swedish competitor.
Share this on TwitterShare this on FacebookEmail