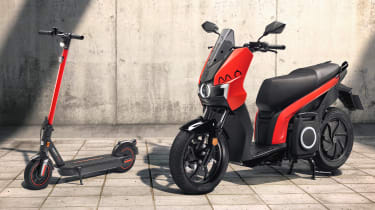 SEAT has launched three new all-electric scooters, which the company says are targeted at city-dwelling commuters. The trio of scooters are ready to go on sale in the UK now – but the firm is still waiting for the Department of Transport to make a decision on their legality.

SEAT’s first option, called the SEAT MÓ eScooter125, is an all-electric moped with similar dimensions to the Peugeot Satelis 125i and Honda Forza 125. Like most mopeds, it features an upright windscreen and a hinged saddle that covers a luggage compartment large enough for two helmets.

When it reaches the UK market, the eScooter125 will be sold in two configurations – one aimed at private buyers and one targeted at fleet users. The private model will feature a pair of USB ports and a tracker, allowing the owner to remotely check the scooter’s location using their smartphone. 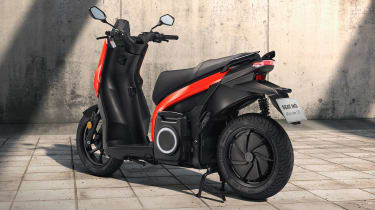 The fleet-focussed model is designed to be shared by company employees and features the same equipment as the private variant, with the addition of a top box for helmet storage and an integrated smartphone mount.

It’s powered by a 12bhp electric motor that’s integrated into the bike’s rear wheel. The motor has a maximum torque figure of 240Nm and gives the eScooter125 a 0–31mph time of 3.9 seconds and a top speed of 59mph – meaning it has comparable performance to a similarly sized 125cc combustion engined scooter.

The electric motor is supplied by a 5.6kWh lithium-ion battery pack, which SEAT says will offer a maximum urban range of 77 miles. Based on the scooter’s estimated usage level, the company also says it should only need to be recharged once a week. 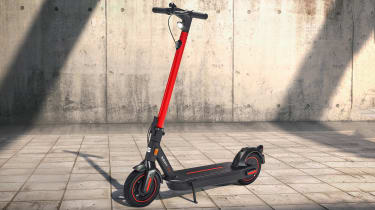 The battery pack can be recharged in the scooter at a charging station, or it can be removed completely and charged at home using a domestic three-pin plug. The system also allows buyers to simply swap the eScooter125’s flat battery for a charged one to keep it on the road with minimal downtime, which SEAT says is most useful for fleet customers.

Pending government approval, SEAT will also launch a pair of standing electric scooters, called the eKickScooter65 and eKickScooter25. They’re both based on the same chassis, but the former features a larger capacity battery pack and a more powerful electric motor.

SEAT says the eKickScooter65 enables longer travel across cities. It’s powered by a 0.5kWh battery pack and has a maximum range of 40 miles and top speed of 12mph. A full recharge takes six hours using a three-pin plug and, unlike most of the scooters in this segment, it features two brakes, with a disc brake up front and a drum brake at the rear.

The eScooter25 is powered by a 0.2kWh battery, which can be recharged in 3.5 hours. It has the same 12mph top speed as the more powerful model, but its maximum range drops to just 12 miles – which SEAT says makes it best suited for commuters completing the last leg of their journey.

Would you like to see SEAT’s electric scooters pass through UK legislation? Let us know in the comments section below…