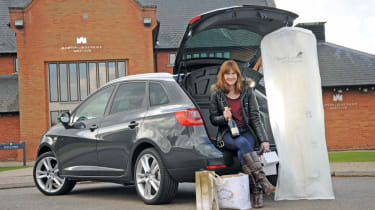 6
The SEAT Ibiza ST and I are a match made in heaven. And to underline the point, the compact estate proved its worth at my wedding last month. Regular readers may recall my search for a wedding venue in a previous report, and when the big day finally arrived, the car was a big help.
With only a couple of days to go before taking my vows, everything was turning into a bit of a blur, but OV11 ADZ took the stress out of all the rushing around. The combination of its compact size and large boot proved invaluable as I collected and carried everything from table plans and decorations to my all-important wedding dress.
The SEAT’s lively 1.2-litre TSI petrol engine also made easy meat of the 20-mile round trip from my home in south-west London to Hampton Court Palace Golf Club, where the ceremony was taking place. That’s probably just as well, too, because it had to make the trip more than once.
On the big day, the SEAT had an early start and was kept busy, as it was used to drop my hairdresser off at the local train station and to pick up the flowers from the florist. Mind you, I did feel slightly guilty, because it was temporarily upstaged by the amazing Audi R8 and Rolls-Royce Phantom I had use of later in the day.

To be fair, few cars attract as much attention as an R8 or Phantom, but the ST would have the last laugh. When we returned to the venue the following morning, its 430-litre boot easily swallowed all of our goodies, including what was left of the wedding cake, plus presents, cards and bottles of champagne – and even the odd potted plant for good measure.
After nearly a year of living with the SEAT, I’m struggling to find anything serious to complain about. The car briefly suffered from an annoying rattle, which seemed to be coming from somewhere in the driver’s door.
After I spent a week or two trying to find the exact cause of the problem, it seems to have disappeared as mysteriously as it arrived and peace has now returned. The only other thing to crop up was the front number plate coming unstuck at one end. A small piece of double-sided sticky tape should fix that.
If all of this is enough to make you consider buying an Ibiza, there’s even more good news because SEAT has just given the entire range a mid-life revamp, and many models are cheaper than before.
But you can no longer get our car’s 104bhp 1.2-litre turbo petrol engine with a manual gearbox. Instead, the 1.2 TSI is now only available with SEAT’s excellent DSG twin-clutch transmission. This spec costs £14,815, which is only £115 more than our manual model did, so you can’t argue with the value for money it represents.
The revised ST estate is even available in sporty FR trim for the first time, so there’s more reason than ever to consider the SEAT. On this evidence it won’t leave you stranded at the automotive altar...

“The SEAT is a stylish small car that can carry surprisingly large loads. If you want the extra practicality of an estate without the usual styling and financial consequences, it’s brilliant.”Stuart Morton, Chief sub-editor

“Silly SEAT has forgotten to put stop-start technology on its DSG models. Surely that’s easier than adding it to its manual models?”ShouldHaveBetterThingsToDo, via www.autoexpress.co.uk