SEAT's Leon Ecomotive is a fine company car, as it's the most efficient version of the hatch 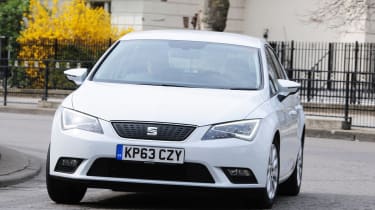 Our reigning Car of the Year is now available as a frugal SEAT Leon Ecomotive model, offering fuel economy significantly better than a Toyota Prius. But should you actually buy the most fuel-efficient Leon ever?

Last month, SEAT recorded its best March sales performance ever – nearly 40 per cent up on the same time last year. The Leon plays a major part in that success story, and the launch of the Ecomotive model is the next chapter. Emitting 12 per cent less CO2 than the outgoing second-generation Leon Ecomotive, it promises to be a serious contender in the competitive eco-friendly hatchback sector.

The SEAT Leon is one of the best-looking hatchbacks money can buy, and it turns nearly as many heads as the classy Volvo V40. Better still, the Ecomotive doesn’t resemble a low-rent eco-optimised model, either. 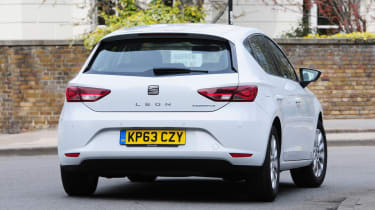 However, look hard and you’ll spot the new car’s subtly enhanced design. To improve aerodynamic performance there’s a body package that includes an extended tailgate spoiler, while the suspension is lowered by 15mm. The black flush radiator grille is unique to the Ecomotive, and our test car had the £1,075 Technology Pack, which comprises smart LED headlights with integrated daytime running lamps.

Inside, it’s hard to fault the restrained but thoughtful layout and solid construction. The straightforward dash design features angular shapes and smart chrome edging, while the first-rate VW Group switchgear and high-quality materials provide the interior with a solid and upmarket feel. The multifunction wheel is great, and with a wide range of seat movement the driving position is excellent. 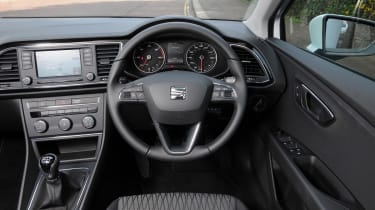 Powered by the same 1.6 TDI as VW’s latest Golf BlueMotion, the Ecomotive has 4bhp more than a regular 1.6 TDI Leon, at 108bhp. As with the standard TDI it has a fairly basic torsion beam rear suspension set-up, but like other Leon models with this chassis, it’s still good to drive. The steering is nicely weighted and it turns in well. Grip levels are good in spite of the low-rolling-resistance tyres, and the hatchback feels considerably more composed through corners than its rivals.

Better still, the 15mm lower height of the Ecomotive doesn’t have a negative effect on how well the Leon rides. With relatively small 16-inch wheels it flows nicely over back roads and is compliant enough around town. Road and wind noise are well isolated from the cabin on the motorway, and while there’s some diesel clatter at idle, overall engine refinement isn’t too bad.

Crucially, the drive for enhanced economy hasn’t left the engine starved of power or made the frugal Leon feel sluggish. As our performance figures show, the Ecomotive will do 0-60mph in less than 10 seconds and is punchy enough in-gear to prevent you feeling outgunned in day-to-day traffic.

As with most eco models, long gearing means you need to make sure you’re in the right ratio. However, the six-speed manual box is great to use and there’s enough flexibility in the engine to ensure the Ecomotive demands few compromises for its 85.6mpg economy.

Emissions of 87g/km mean a free tax disc, while company car drivers earning at the higher rate will pay just over £1,000 a year in Benefit in Kind tax. 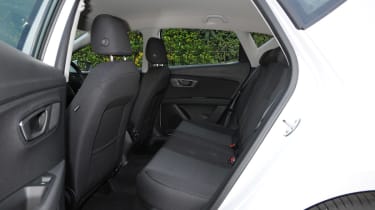 The MQB platform and mechanical parts are used across the VW Group on a host of famously reliable models such as the Audi A3, Volkswagen Golf and Skoda Octavia.

The 380-litre boot is practical, and volume rises to 1,210 litres with the bench laid down. There is a step in the floor when the seats are folded, but the load area is still very useful.

Wide-opening rear doors make access easy, and tall passengers will appreciate the generous head and legroom. Also, you get plenty of cabin stowage, with a lidded cubby ahead of the gearlever on the centre console, a large glovebox and decent door bins. So the Leon scores well as a practical family hatch that’s got a bigger boot and more room inside than either of its rivals in this test.