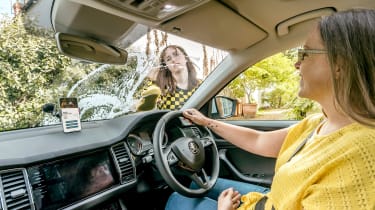 Skoda has launched a new ‘Parent Taxi’ app that allows parents to calculate how far they’ve driven their children and then give them chores to do as payment for the trips.

Parents in the UK drive an average of 1,648 additional miles every year ferrying their kids around, equivalent to £12,565 if the average London taxi rate were to be charged.

Some 66 per cent of 1,723 parents surveyed by Skoda said they sometimes feel like a taxi service for their children, spending around three hours a week on average giving them lifts to and from places.

Parents in Northern Ireland drive the furthest for their children – an average of 2,142 miles per year. London parents are second on 1,789 miles, followed by those in the south-west with 1,760 miles.

The Skoda Parent Taxi app uses GPS to track a car’s journey and lets parents set how many miles equates to any one chore for the children to perform.

Once a journey is completed, the app creates a total of the miles travelled and then reveals which chores should be done in return. The driver can send this via a receipt to the children’s smartphones or tablets and share it on social media. Parents can also view past journeys and fares, create bespoke chore receipts and track the total number of journeys completed.

Skoda’s survey showed the most popular household jobs that parents ask their kids to do are tidying their bedroom, doing the dishes, taking out the rubbish and vacuuming. The most common purposes of their journeys with their children, meanwhile, are dropping them off to see friends, taking them to friends’ birthday parties and giving them lifts to sports events.

What do you think of the Skoda Parent Taxi app? Will it catch on? Let us know below...