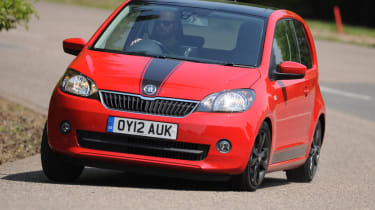 8
Buy used for less at Buyacar

We thought it would take years before a serious rival to the VW up! appeared. But only a few months after securing the city car crown, the VW faces a stiff challenge from its cheaper Skoda Citigo cousin.

With its funky black stripes and striking 15-inch black alloys, the Skoda looks anything but the poor relation. These sporty accessories are optional extras, yet even without them, it’s easy to spot the differences between the two.

Even though they share the same chassis, the Skoda is 20mm longer and slightly lower than the VW. The Citigo does without the glass tailgate and kinked C-pillars of the up!, while at the front it features Skoda’s trademark chrome-lined grille and reworked headlights.

Choosing between the two will come down to personal taste, but in our eyes the Skoda doesn’t quite have the chic appeal of the VW.

Despite this early setback, the Citigo regains the advantage on the inside. Our Elegance test car has electric windows, heated seats and a Portable Infotainment Device (PID) which includes sat-nav, a trip computer, Bluetooth connection and media player all as standard. While you get the same kit on the up!, it costs £655 more, pushing the price above £10,000.

All of the cabin materials feel as robust as those in the VW, but the Skoda has a thicker steering wheel and a textured, rather than gloss-black, plastic dash. It feels more sombre than the light and airy SEAT, but an ivory- coloured finish is a no-cost optional extra.

Big windows all-round mean visibility is excellent, while it’s easy to get comfortable thanks to clever ergonomics, although the steering wheel doesn’t have reach adjustment.

Like the other cars, the Citigo’s interior sets new class standards for practicality. There are five bag hooks on board – one in the glovebox and four in the 251-litre boot.Plus, our Citigo came with the entertainment pack (£100), which includes four additional speakers and a base for your iPod that slots neatly into the cup-holder.

Our test car was a Greentech model, which means the 74bhp 1.0-litre engine benefited from efficiency-boosting kit like stop-start. So as well as being the cleanest car (it emits only 98g/km), the Citigo was quickest at the test track, taking 17.8 seconds to cover 50-70mph in fifth – nearly two seconds less than the up!.

This extra turn of speed could be because the Skoda is 64kg lighter than the VW, but on the road it matches the Mii and up! for refinement, although the lower ride height of the Greentech results in a slightly firmer ride.

It noses in front on price. The Citigo is not only the cheapest choice, from the entry-level model right through to the range-topper, but stop-start gives it the lowest running costs and best fuel economy here. This keen value means buyers have the freedom to add extras such as the £260 five-year warranty, making the Skoda a very compelling package indeed.

Chart position: 1Why: The Citigo is the only one of these cars currently available with three or five doors. Our Greentech Elegance model is well equipped and exempt from road tax.