Strong badge appeal makes VW very desirable, but will price hold it back? 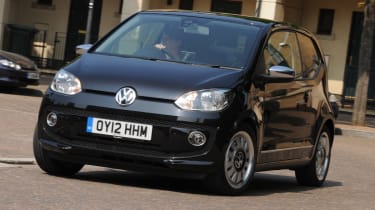 Last to feature in this test but first of the three to arrive on UK shores, the VW up! has a distinct advantage in this company.

The badge on its bonnet holds strong appeal for image-conscious buyers and the car has already been in dealers for several months. The parent company has also ensured that when these three cars are lined up alongside each other, the VW looks the sharpest.

Bold design cues like the unique rear windows and glass-covered tailgate instantly set the up! apart from its Skoda and SEAT cousins. The model in our pictures is a special-edition up! Black, which gets retro-inspired 16-inch wheels, chrome mirrors and pearlescent paint, but the High up! model we tested looks just as stylish.

Yet the gap between the VW and its siblings closes again inside. The up! shares the same superb build quality and excellent visibility as the Citigo and Mii, but there’s nothing in its cabin to justify its higher price tag.

The VW’s steering wheel is thinner than the other two’s, which makes it easier to see the dials clearly, but that’s about it. While the piano-black finish on the dash and steering wheel looks great, we found the reflections it causes in sunny weather to be distracting.

Our High up! had the same equipment as the Skoda, so heated front seats, air-con and the Maps & More touchscreen infotainment system all feature. However, options like the £350 sensor pack (it brings acoustic parking sensors and cruise control) and emergency braking are inexplicably pricier to have on your VW than they are on the Skoda.

While the up! shares the same spacious interior as its siblings, it has a trick up its sleeve. With the rear seatbacks folded, it has the same 951-litre luggage area as the others, but a movable false boot floor means the VW is the only car here with a fully flat loading bay. While this comes in handy when filling to the roof, most of the time you’re likely to leave it out to maximise the standard boot.

At the track, the up! matched the lighter Skoda from 0-60mph, with a time of 13.8 seconds, while in our braking tests, both cars stopped a lot sooner and more progressively than the grabby SEAT.

Back on the road, the VW felt slightly more responsive when cornering, due to its larger wheels and lower-profile tyres, while the hushed ride and great refinement are shared with its close relations.

Yet there’s a price to pay for all this. Equip the up! with the same fuel-saving technology that the Skoda gets as standard and it’ll cost you over £1,000 more than the Citigo.

While the up! has better predicted residual values than either of its cousins (retaining more than 50 per cent of its value over three years), it’s not exempt from road tax, and we’re not sure that typical buyers in this class will want to stomach the extra cost.

Chart position: 2Why: The up! is our current class leader and has an edge with its sleek looks and desirable badge. Yet it’s also the least efficient and most expensive car here.