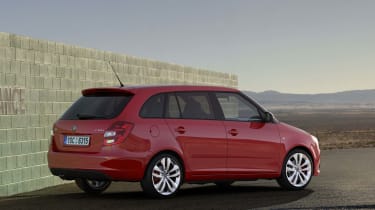 It's the fastest Fabia ever built, and the most practical to boot!

The Czech firm's sporty vRS is now available in estate car guise. But does the newcomer manage to blend practicality with performance? We've driven it to find out.

Inside, build quality is as good as ever and extras include vRS branded hugging sports seats, a leather three-spoke steering wheel and metal racing pedals. However, the sporty additions fail to meet the levels you might expect from the sports focused flagship.

Under the bonnet it's all change too. There is no longer a diesel option and in comes a new 1.4-litre TSI super- and turbo charged engine, the same punchy unit found in the latest Polo GTI. As a result, performance is very similar to the VW. 0-62mph takes 7.3 seconds and eficiency is rated at 45.6mpg. It's true both these figures are slightly worse than the Polo, but you can quickly forgive the Skoda when you take into account the Fabia estate costs £1,500 less than the Polo's £18,000 pricetag.

The seven-speed DSG 'box performs well and the steering-wheel-mounted paddles are a great touch too. But the Fabia can get a bit frustarting to drive at times with the DSG 'box overly keen to select the most efficient ratio which can detract from the driving experience. The punchy and receptive is great of the line, but our test car did sound like it was struggling at times, particularly above 5,000rpm, which is where you would expect the vRS to be at its best.

Handling is as good as ever though, and with the vRS added sports suspension and lower ride height, the Fabia now has even more stability through the corners. And then there's the boot. Big enough for 480-litres of storage space, the small supermini has more than enough loading space to compete with any of its rivals.

On sale on July 28, the Fabia vRS is a great technological achievment. It looks good, handles well, and it's cheap to run. All this for a very attractive price too, but there is still the small case of the sometimes tempormental engine and a gearbox thats over-eagerness to be efficienct can get a little frustrating.